The Princess and the Goblin

At times, it seems children are the easiest to fool. Watching The Princess and the Goblin, I remembered the highly publicized incident a few years ago in which a juice company was caught selling colored sugar-water as baby apple juice. The children sitting in the theatre at this film are likely victims, too, although of not as heinous a crime. The Princess and the Goblin, based on a marginal children's classic by George MacDonald, is the story of the princess Irene who, left in the care of a dopey, snoozing nanny when her father the king (voice of Ackland) leaves the castle on affairs of state, becomes lost in a dark part of the forest with a precocious cat named Turnip and learns there are scary things out there. She is rescued, natch, by a young village boy named Kurdy, the son of a miner, who tells her everybody knows goblins are real, and that the only way to make them go away is through song (they hate music, and you'll hate the syrupy, half-baked tripe this kid launches into over and over again throughout the film's hour-and-a-quarter). Soon thereafter, we meet the objects of their fears, but the goblins, underground dwellers all, are actually quite stupid, haphazard creatures ruled by their own snot-nosed king (booger jokes abound), his fat-lipped wife, and the evil prince Froglith (voice of Mayall). Froglith's plan is to flood the mines of the “sun people” and regain control of the kingdom by wedding the princess and inheriting the throne. The princess, meanwhile, has begun conversing with the spirit of her dead great-grandmother who gives her a ball of magical string and tells her to “follow the thread,” or some such nonsense. Parents will be bored by the uninvolving story, the substandard animation (we're talking ten notches below Don Bluth) and the cheap shots at trying to get children's money. The film's only saving grace is Turnip, the cat, who with the help of a brave mouse tries to protect his mistress against a mean goblin kitty. The Princess and the Goblin is the first animated feature out of the gate this summer, and it's easy to see why. It can easily avoid such competition as Disney's upcoming The Lion King and the animated A Troll in Central Park. About halfway through the film, the action cut to a repeat of the film's opening frames which caused a tot in the crowd to ask, “Is it over, mommy?” It's only just beginning, kid. 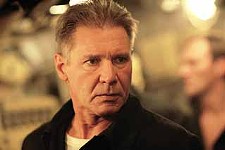 K-19: The Widowmaker
In the wake of last August's Russian naval disaster -- during which 118 sailors aboard the nuclear submarine Kursk perished in the Barents Sea while ... 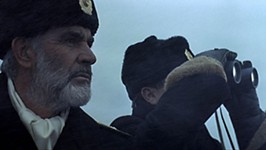 The Hunt for Red October
This Tom Clancy thriller gets the proper screen treatment here with this first-rate cast and direction by one of the genre’s best: Die Hard director ...