Dead Poets Society meets Stripes. I hate easy tags like that one as much as you probably do, but in this case, it fits like a glove. In Marshall's newest tearjerker-cum-life lesson, DeVito plays Bill Drago, a down-on-his-luck ad man who takes a hitch with the army as a “communications skills” teacher when he's fired from his advertising position. As the civilian assigned to instruct a group of eight new recruits in the finer points of remedial reading and writing, DeVito plays Drago as a man who'd pretty much rather be anywhere else than in This Man's (and Woman's) Army. His students have picked up the moniker “Double Ds” on base (that's dumber than dogshit) due to their less-than-perfect SAT scores, and it's up to DeVito -- with less than no help from the base brass, natch -- to set them straight. His class, unfortunately, appears to have come straight out of some old Audie Murphy film: there's the hayseed trailer trash, the streetwise young punks, the not-quite-all-there bumpkin, and the kid who wants nothing more than to be like his army dad (who died in 'Nam). It's not the US Army, it's the US Archetypes. To this scholarly end, DeVito rallies his young charges around William Shakespeare, teaching them the finer points of the Bard's Hamlet while enthusing them with this tale of “sex, violence, incest, madness, and murder.” Suffice it to say, these unconventional tactics work wonders, and before long, the rag-tag troops are performing like a well-oiled howitzer, spurting off soliloquies at a moment's notice and feeling good about themselves. That's all fine and wonderful, but once again Marshall telegraphs her familiar storyline eons in advance. From the ad campaign, we pretty much know how things are going to turn out, and her pedestrian attempts at subplots (one, DeVito's burgeoning affair with a staff sergeant, seems to come out of, and go, absolutely nowhere) are even more transparent than those in Awakenings. Marshall seems to have had a bad case of directorial narcolepsy of late; here's hoping she can rouse herself long enough to pull out of this all too predictable tailspin. 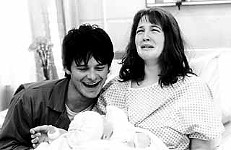 Riding in Cars With Boys
This rendering of Beverly Donofrio's autobiographical book about a woman who believes in her literary abilities, and has faith that she can overcome the unplanned ... 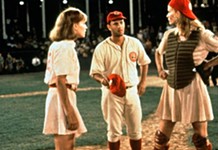 A League of Their Own
The story of the short-lived women's baseball league gives Marshall and her cast the opportunity to examine oblique roots of modern feminism and have a darn fine time doing it.