Rodman Flender, huh? Yeah, sure, whatever. Do I really need to tell you that Leprechaun 2 stinks on ice? I doubt it, but I will anyway. If you saw the first film, you know what it's about already, because it's basically - no, completely - the same film with different victims. This time out, our diminutive, psychotic friend is in search of a bride. If a young girl sneezes three times in a row and nobody around her says “God bless you,” she becomes his betrothed. Seems it happens every thousand years or so, and since the millennium's just around the corner – and the first film made, oh, $40 or $50 over gross – it's Leprechaun time again. Rodman Flender (yeah, right) has cast his hat into the splatter movie ring with what can only be called stylistic consistency: the sets are apparently left over from some ancient Star Trek episode, the acting, for the most part, is so wooden, Abe Lincoln could have built a cabin out of it, the cinematography is apparently non-union, and the gore effects (what should be the redeeming factor in a film of this genre) are of the Karo Syrup and food color variety. It's horror movie in all but the correct sense of the word, and to top it off, they missed their coveted St. Patty's Day release date. Rodman Flender? Well, hey, I wouldn't want my real name on this either. 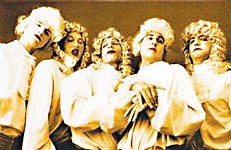