The ever-idiosyncratic Henry Jaglom will win few new fans with this one-note investigation of contemporary women's feelings about having babies. Co-written with his real-life wife Victoria Foyt who also stars in the movie, Babyfever has only the barest minimum of plot. Much like another recent movie of Jaglom's, Eating, Babyfever consists of a group of women who talk amongst each other as well as to the camera about the topic at hand. Here, the topic is having babies and the need to satisfy this desire before getting too old. Biological clocks and their relentless forward progression is the real topic. Most of these women appear to be in their thirties and most of them are not at ease with their inner clocks. They feel the pressures of career, the lack of a mate, the fear of commitment  all the familiar reasons why many contemporary women delay conception and childbirth. Yet they feel incomplete, insecure, and in denial. Only a couple of them are firm regarding their desire not to bear children. The others are all uncomfortable with their decisions primarily because they feel as though they have not really made choices. Each of them, while waiting for the right time to arrive, finds that moment never arriving -- even the ones who are pregnant or are already rearing children. Meanwhile, they hear their biological clocks marking time like eternal doomsday machines. And they talk and they talk and they struggle and share. The ostensible story centers on Gena (Foyt), who attends a baby shower while waiting for the results of a pregnancy test. The would-be father (Salinger) wants to buy a bigger house and settle in and raise a family. She is not sure about anything. Jaglom's style is largely improvisational, with characters inventing dialogue and speeches as they go. And while what these characters say is not uninteresting, they don't add any new thoughts to the dilemma. Certainly it is a novelty to hear women talking about such things in the movies, moreover witnessing a whole movie dedicated to the topic. As viewers, women struggling with these issues will likely recognize aspects of themselves in Babyfever though they are not likely to acquire any new insights or understanding. Also disturbing is the realization that though these characters are all obsessed with childbearing and having an infant to nurture, none speak about child-rearing and living with teenagers and financing a child to maturity. Each seems concerned primarily with her own needs and desires, with childbirth and not parenting. The real revelation may be that the biological imperative governs the act of procreation  nothing more and nothing less. 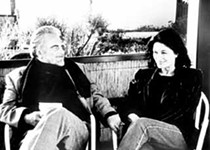