A nifty idea that goes everywhere (and nowhere). Williams takes another turn for the dramatic (which, in the past, has almost always resulted in a simultaneous turn to mediocrity) in this unique, if ultimately unamazing film from director Forsyth (Local Hero). Here he plays a man named Hector -- actually five men named Hector, as the film is divided up into a quintet of shorts set in different periods of human history, from our dark, shaggy, cave-bound past, through the age of Rome, and eventually to the present. Woven together with a curious female voiceover that tells “the story of a story,” Forsyth and Williams presume to enlighten us all on the unchanging, absolute nature of humanity's eternal struggle for hope, love, and glory. A noble goal, to be sure, but Williams and company fall flat as the uninspired acting quickly settles into an unambitious rut and the overly similar storylines become cloyingly similar and dull. Despite the fact that Being Human boasts a marvelous cast, it all seems for naught. With the exception of Williams himself in the final, modern-day epilogue, concerning a harried real estate investor meeting his estranged children for the first time in years, almost all the characters are of the uninspired cookie-cutter variety. Even the normally incendiary Turturro, Roman Master to Williams' slave, appears to be on autopilot. Forsyth's film is a scattershot mess, crammed with good intentions that only occasionally break through the movie's overall sense of internal ennui. I thought anything would be better than Mrs. Doubtfire, but apparently I was wrong. 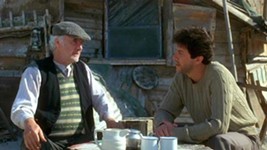