Seventeen-year-old director Matty Rich burst on the scene a few years ago with his debut film Straight Out of Brooklyn, a dramatically evocative though stylistically inchoate glimpse of family life in a black ghetto tenement. Well, chalk it up to either sophomore slump or plain incompetence, but Rich's new film The Inkwell technically and narratively misfires on many scores. Despite these lapses, however, there still emerges something likable and original in this work, though it has now become more difficult to regard Rich as a promising young director. Set in the summer of 1976, the story revolves around an upstate New York black family during a two-week visit with their well-to-do relatives in Martha's Vineyard. 16-year-old Drew (Tate, in a remarkable shift from his characterization of the conscienceless O-Dog in Menace II Society) is a nerdy but troubled youth. He talks to and carries around a doll named Iago that he straps on to the back of his bicycle built for two. There's talk of his arsonist proclivities and he's emotionally torn between his parents who are having growth problems of their own. Additionally, Dad (Morton) is a former Black Panther who finds it difficult to accept the labored hospitality of his black Republican brother-in-law (Turman). Add in some peer pressure, a miracle-working pro bono psychiatrist, a snooty female love interest (Pinkett), and a completely off-the-wall Summer of '42 subplot and you have the makings of a glutinous New England chowder. Almost any one of these plots would have been enough to sustain the movie; their sheer abundance creates an irresolvable hodgepodge of narrative strands and loose ends. More perplexing, though, is the movie's lack of visual technique. And by this I'm not referring to flourishes and fancy camerawork, but simply the intrinsic need for the camera to be in certain places at certain times in order to tell its story. The movie contains an unforgivable number of gaps. Despite wonderful performances by Tate and Morton, the inescapable truth is that The Inkwell should never have left the drawing board. 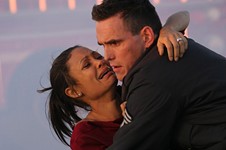 Crash
The paths of a seemingly unconnected, multicultural group of Los Angelenos cross in the most compelling American movie to come around in a long while.