Animal House updated for these Roaring Nineties. That's all you need to know, but what the hell, I've got a minute. Tom Lawrence (Young) is a pre-frosh visitor to idyllic Port Chester University. Fresh off the bus, he's been assigned a weekend guardian in the form of anti-BMOC Droz (Piven), the head of an on-campus fraternity affectionately known as “the Pit.” The Pit, it should be obvious, is National Lampoon's Delta House reborn, a squalid, smoke-shrouded, thoroughly cool hellhole that's home to those few students who refuse to give in to the “causeniks” and “womynists” who make up the majority of Port Chester's student body. When President Garcia-Thompson (or Dean Wormer, if you're a really big NatLam fan) hands the Pit a $7000 bill for damages incurred, well, there's really nothing else to do but throw a really, really big party (featuring a tuneless house band called “Everyone Gets Laid”) to scrape up the requisite cash. Meanwhile, the underground conservative fraternity, Balls and Shaft, headed by Saturday Night Live's brilliantly unctuous David Spade, plots with the president to oust our fair hooligans once and for all. PCU occasionally takes inspired potshots at all the politically-correct campus fads these days -- vegans, militant feminists, gay and lesbian groups, African-Americans, hippies, liberals, conservatives -- no one is left out, and that in itself makes for a very PC movie. Even the university's president is a woman named Garcia-Thompson. As for the members of the Pit, it's a multi-ethnic, multi-gender bastion of sanity in the midst of an overly-embattled collegiate wasteland. Director Bochner keeps the pace moving and the tone light while leads Piven, Young, and especially Spade are excellent in their respective roles. George Clinton and the P-Funk All Stars put in a lengthy appearance toward film's end, to boot. All in all, a silly, nicely goofy waste of time. (By the way, whatever happened to gratuitous nudity?) 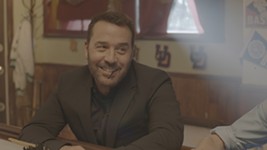 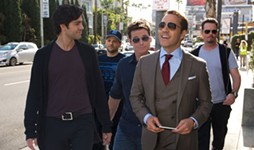