How do you know who you are? Is identity the sum of social appearances and assumptions or does it stem from something internal and personal? Perspective is everything, and that's just fine with Suture, a highly theoretical film posing as a psychological thriller. Written, produced, and directed in tandem by McGehee and Siegel, Suture draws inspiration from the great paranoid thrillers like Mirage and Seconds and, obviously, the work of Hitchcock. The title Suture reflects on the movie's themes of amnesia, plastic surgery, and “twins.” It also refers to the film theory concept of “suture” which explains the psychoanalytic process by which the audience's perspective becomes identical with the film's perspective, largely through the use of seamless or “invisible” editing. The story involves two long-lost half-brothers who contact each other after their father's death. Vincent (Michael Harris) uses the arrival of his half-brother Clay (Haysbert) to engineer his own death. But instead of dying in the explosion (in which he is driving Vincent's car and carrying his identity papers), Clay survives only to be burnt beyond recognition and suffers amnesia. At the hospital, a plastic surgeon (Mel Harris) reconstructs his face based on pictures of Vincent, and a psychiatrist (Shimono) and family friend (Merrill) help reconstruct his personality and restore memories he doesn't possess. This, however, is the movie's conceit: Vincent is played by a slender white man, Clay is played by a larger African-American man and no one in the film notices the difference between the two. In fact, the two half-brothers remark on how similar they look and no one at the hospital notices their different skin colors or other physical dissimilarities. Only the audience is aware that they are two different men, thus perforating the narrative suture. An eruption of theoretical questions stem from this narrative incongruity, making the experience of watching Suture anything but passive. The question at the heart of the movie is how well its narrative conceit works. I found it a distraction, even though that's precisely what it intends to be. Yet the distraction kept me solely focused on theoretical issues with the implausibility simply disrupting the otherwise realistic scenario. A contemporary film noir incongruously set in sunny Phoenix, Suture was shot in spectacular wide-screen black-and-white. Its experimental focus was intriguing enough to pick up some heavyweight performers like Mel Harris (Hope on thirtysomething) and Dina Merrill. It also attracted Steven Soderbergh (currently shooting his own modern film noir in the Austin area) to come onboard as executive producer. The practice of film theory has rarely been this entertaining. 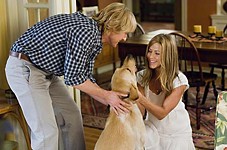