Heaven and the Sensitive, New Age Guys of America help me, I liked this film. By all I hold dear, I shouldn't have. I'm a gentle man, a soft soul. I do the dishes, I bathe my baby, I healed my inner child. I saw The Joy Luck Club. I cried at Shadowlands. And this is another testosterone-fueled comedy, replete with fistfights, jarhead Marines, rednecks, car crashes, liberal consumption of alcoholic beverages, and a Playmate who displays her brightly buffed body at the drop of a blouse. Yet something seized the "Iron John" in me and I enjoyed it. It wasn't the story: cocky young con man (McNamara) a day from his Navy discharge is teamed with salty old vet to move female prisoner (Eleniak) from Marine jail to Navy jail. It's your standard road movie (picturesque locales, events include: escape attempt, car breakdown, auto theft), standard buddy picture (two guys can't stand each other but bond anyway, this the substitute son/substitute dad variation), standard cop/crook romance (they shouldn't fall in love, it's against the rules, but they're both good kids), in one big standard-drive van. But doggone it, everybody looks to be havin' a big time, and it's easy to let down your PC hair -- or shave it off -- get post-sensitive, and go along for the ride. Berenger does Warren Oates, sporting a puss like he got a whiff of rancid cat and growling lines like he's gargling ball bearings. There's a flotilla of cameos -- all for cheap-ass throwaway parts -- only Hopper's copped the Quirky Wing of the Screen Actors Guild to make each a true hoot: Busey a gloating jarhead goon, Glover a twitchy Navy clerk, Forrest a chipper tow trucker; all are squealers. There are choice country Carolina locales and a good-time soundtrack by Dwight Yoakam (it even has "Cryin' Time" sung by Buck Owens!). Ah, squat, there's no good way to explain it. It's just a good ol' bad ol' low-road road movie, a throwback to thirty years ago, a picture with hairy arms and a brew in one fist. Maybe that's why, as it ended, I could swear I heard Sam Peckinpah's ghost chuckling away. 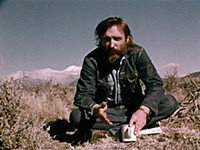 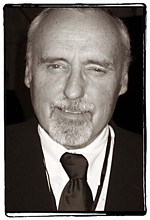 In Memory of Dennis Hopper
'A walkin' contradiction, partly truth and partly fiction' 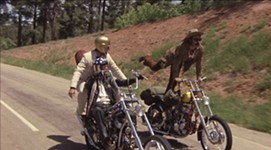 Easy Rider
This is the movie by which Hollywood discovered the commercial power of “youth culture.” Fonda and Hopper’s now-classic film hit the old guard with the ... 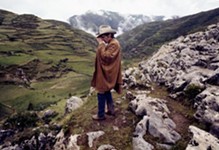 The Last Movie
After Easy Rider Dennis Hopper is given a lot of money to go to Peru and make a movie. Why? Because it's cheaper to film ...