Great title. Bad movie. Capitalizing on our fetishistic attraction to the image of women and guns (helped along by the recent popular success of Thelma & Louise), wishful musings about the rise of the “female buddy” film (also helped along by Thelma & Louise), and the theatrical comeback of the Western over the last few years, Bad Girls seems a made-to-order Hollywood fantasy. Like Clint Eastwood's Unforgiven, Bad Girls begins with the abuse of a prostitute whose vengeance sets the whole plot in motion. But in Bad Girls, plot development is synonymous with costume changes. Chaps, corsets, silks and flannel -- for women on the run who carry no baggage other than their historical baggage as former prostitutes, these four desperadoes scam more new outfits than a bevy of runway models. And at least one of them had to be packing a curling iron. But, okay, this is Hollywood after all, and what's the point of having four women starring in a movie if they don't at least look good, albeit illogical. The really grievous problems with Bad Girls are its lack of plot and undeveloped characters. On the lam after the most trigger-happy of the bunch, Madeleine Stowe, kills a customer who's roughing up one of the other girls in the brothel, they have very little sense of purpose once they're on their own. With a vague plan of heading toward the Oregon Territory to run a sawmill, Bad Girls moves forward in episodic fashion as they encounter one difficulty (or love interest) after another. You can practically picture it as a weekly TV series that poses hour-long detours on the road to the elusive Oregon Territory. The barrenness of the plot would be less noticeable, however, if there were at least some solid characters to hang the story on. Stowe nicely plays the sternness of her character against the delicacy of her features but even her tough-gal posture is belittled when she is whipped by one man and rescued by another. Masterson, considering her range as an actress of intelligence and physical dexterity, is given surprisingly little to do. As for the others, MacDowell flirts and Barrymore pouts, though each does what she does very well. Director Kaplan (Kaplan was brought in after Bad Girls' first director Tamra Davis was summarily canned. Having directed Jodie Foster to an Oscar in The Accused, Kaplan no doubt was brought in due to his presumed sensitivity to feminist issues ) here shows remarkably little flourish or snap. It might be said that “Even Bad CowGirls Get the Blues.” 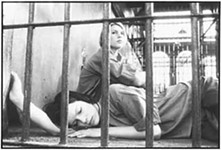 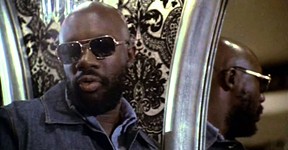