Something in us loves an animal running. There is purpose and grace, power and freedom in it, of a kind we humans had long ago but lost on our way up the ladder of civilization. To see it awakens in us some trace of what it is like -- the feel of the wind, the speed, the fire in the muscles -- and we thrill. When this sequel to Disney's recent version of Jack London's novel focuses on its titular hero racing through the Northwestern wild, it's bracing. Hiro Narita's cinematography bursts with the golds, blues, and greens of the landscape, director Olin puts the camera where we can best feel the animal in flight, and trainer Joe Camp gets White Fang -- or Fangs; five animals play the wolf/dog -- to move like a furry missile. But in stretching this wolf's tale beyond where London cut it off, writer David Fallon goes too far. He heaps on our cinematic plate more than enough stories for this kind of juvenile adventure: the quest of a Haida maid (Craig) to find a white wolf that will lead her tribe to a lost herd of caribou; a cross-cultural romance between the maid and White Fang's master (Bairstow); White Fang's hunt for his master when the two are separated in a river; the plot of a preacher to move the Haida off their land; the hunt for the caribou; the romance of White Fang and a wolf. By the end, Fallon is hurling story at us, with ever-more improbable action scenes and a climax that's three parts Perils of Pauline, one part Guns of Navarone, and a jigger of Treasure of the Sierra Madre. Olin keeps a pretty sure rein on this runaway wagon (one of the action serial clichés Fallon uses here), and the actors are fine (especially Molina as the sinister minister; his eyes are globs of tar under thickets of black briars), so the film, for all its excesses, is still likable. And lovely, thanks to Austinite Cary White's production design. But it's best when the wolves are moving. Maybe when the third one is made -- the final scene screams White Fang: The Next Generation -- they'll leave the humans out of it and just run with the pack. 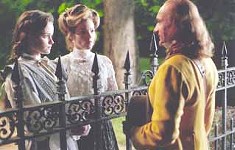 Tuck Everlasting
Winnie Foster (Bledel) longs for life beyond her garden gate. The year is 1914, and the teenager wants to escape the clutches of her protective ...