Fans of Chow Yun Fat's blood-soaked collaborations with John Woo may be disarmed by this good-hearted fantasy which is long on romance and comedy while relatively short on action. The plot follows Chow, a Chinese-American C.I.A. agent, as he is sent undercover to mainland China to retrieve a mysterious “treasure” from the Shaolin temple, the legendary martial arts school that has been the subject of hundreds of chopsocky pictures. Along the way he finds himself fighting government traitors, wrestling with his cultural identity, and wooing a young girl held prisoner at the temple, who just happens to have supernatural powers! For most of its running time, Treasure Hunt is engaging, thanks to Chow Yun Fat's excellent performance, which gives the script's complex juggling act of movie genres some cohesion. However, during the picture's final stretch, its strengths become its weaknesses, and the unevenness that originally seemed so charming becomes a tad annoying. To top it all off, Lau's picture ends on weak knees, avoiding tragedy in what looks suspiciously like a re-shoot. Still, fans of Chow's suave acting style will find much to enjoy there, and it's always great to see Shaw Brothers' star Lui Chia Hui (Master Killer) back on the big screen. 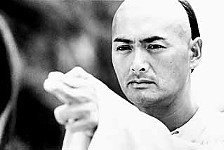