What are Ice-T and F. Murray Abraham doing in the same movie? Remaking The Most Dangerous Game for the umpteenth time, as it turns out. Remade every 10 or so years, this 1932 classic pit a megalomaniacal hunter on a remote island against his quarry of human prey. The basic conflict, with its elements of the chase and the mano-a-mano showdown, must be a natural for the movie screen or so it would seem by the frequency with which we return to it. With last year's Hard Target, and now this, it appears that the frequency quotient of this hunter vs. human hunted narrative form has just been upped. Surviving the Game's contribution to the pathological screen dimensions of the great white hunter is a racial element. With Ice-T playing a homeless man duped into becoming the human target, the question of an all-white group of men hunting one lone black man becomes muddied (or so the filmmakers hope) by the inclusion of Charles S. Dutton in the hunting party. Racism is only one of this homicidal group's problems, however. Their behavior is like that of fierce, conscience-less animals on anabolic steroids. Machismo and superiority run unchecked. These guys probably view themselves as men's men. The one played by F. Murray Abraham, Dr. Wolf (that's his character's name, really) even brings his son on this trip because he thinks the boy is becoming too much like his mom. As out-of-whack and sophomoric as all this is, the movie sustains a rudimentary action interest. So much cultural sickness is displayed so openly and the actors playing the hunters all infuse their characters with a certain zest (espcially notable here is Gary Busey). Ice-T, who gets to race around mostly by himself in the wilderness, is left largely to his own acting devices. Best-known as Spike Lee's cinematographer, this is director Ernest Dickerson's second film (following his debut with Juice). He has a definite flair for action pictures but the stunning contributions from cinematographer Bojan Bazelli (King of New York, Deep Cover, The Rapture, Patty Hearst) add immeasurably to the movie. 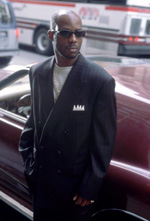 Never Die Alone
Every known hip-hop gangster cliché comes to the fore in this film starring DMX and David Arquette.