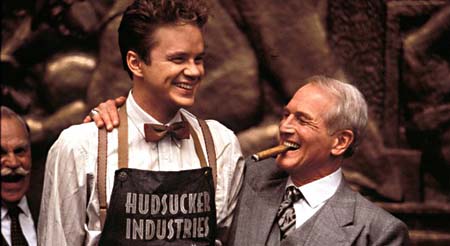 Those wacky Coen brothers (Ethan produces, Joel directs, both script) are at it again with the help of Sam Raimi (Evil Dead, Darkman), who also co-scripted and directed second unit. The Hudsucker Proxy is the Coen brothers' most accessible film to date. It's their clearest comedy since Raising Arizona, though it's not nearly as goofy as that earlier work. It's more an ode to genres gone by, a loving tribute to the movies of the Forties and the films of Frank Capra, Howard Hawks and Preston Sturges. The Coens, however, are better at constructing atmospheres than telling stories. And while Hudsucker Proxy is a little less “weird” than most of their previous efforts, it still retains a mannered and quirky air. The set pieces are stunning and create the illusion of a fabricated New York City. The artifice is so evident that you practically expect the performers to break into song and dance at any moment. The performances, also, walk a line between a goofy realism and an understated surreality. Set on the cusp of 1959, it follows the one-day rise of Norville Barnes (Robbins) of Muncie from the ranks of the mailroom to the presidency of Hudsucker Industries. It seems that Hudsucker's president has taken an inexplicable flying leap out the window and the board of directors decides to appoint a rube as president, thereby deflating the stock so they can buy it back cheaply. Robbins makes a great patsy in the early part of the movie, part Muncie hick and well-schooled business college graduate. Leigh is the Pulitzer Prize-winning girl reporter who walks it like Rosalind Russell and talks it like Katharine Hepburn. It's the film's most mannered performance and you'll either like it or not -- no in between. Newman plays Hudsucker's next-in-command with matinee idol oiliness. Then Norville invents the Hula Hoop, which revives the company's failing fortunes, and from there on out he's not the same old dolt. That hampers the film's narrative structure. But Hudsucker Proxy works more like a fairy tale in which all implausibilities are acceptable and none of it has to play by real-world rules. But it's a fairy tale without any lessons, a satire without any targets.