Finally, a movie that's truly unlike anything we've seen before: Zero Patience is a movie musical about AIDS. Yes, a musical, as in that singing, dancing spectacle kind of entertainment. This Canadian film takes its title from Patient Zero, the posthumous nickname given to the French-Canadian flight attendant presumed to have been the first to spread AIDS throughout North America. Greyson busts open the myth of Patient Zero and also takes on the so-called “truths” of a mutated simian virus as being the source of the human HIV virus and that HIV is the sole cause of the AIDS virus. At the heart of Zero Patience is a fictional story about a romance between Patient Zero and Victorian sexologist and explorer Sir Richard Francis Burton. Having inadvertently discovered the Fountain of Youth, Burton is still alive today and works as the curator of the Museum of Natural History. He is very anxious to add Patient Zero to his Hall of Contagion. The plot only gets more muddled from there. The movie plays like an ACT-UP theatre work, combining street theatre strategies with direct address to the audience and sloganeering speeches. And then there's this constant barrage of choreographed songs and dances. Some of the numbers are unforgettable: “Pop a Boner” is a rousing rundown of bathhouse etiquette, “The Butthole Duet” features a pair of singing sphincters summarizing the merits and demerits of anal intercourse. For its sheer outrageousness and setting of new standards for rude, crude and lewd, director Greyson is matched only by someone like John Waters. The movie's buoyant gaiety is marred, however, by its murky plot, frequently weak acting and often mediocre music. Still, it's an amazing spectacle to behold. Spunk, humor, enthusiasm and wit burst the frame at every opportunity. The common expectation for a musical about AIDS would be dirge-like tunes and somber dance movements. Not the case here. Zero Patience thumbs its nose at the specter of death. The movie forms a conga line into the heart of AIDS myths and refuses to go gentle into that good night.

Wendy and Lucy
From the director of Old Joy comes this minimalist story about a girl (the elfin Michelle Williams) and her dog getting by in society's margins. 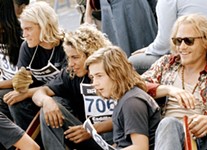 Lords of Dogtown
This narrative re-creation of the skateboarding doc Dogtown and Z-Boys is a blast, as accurate as it ought to be with more than enough mythology and gut thrills thrown in for good measure.