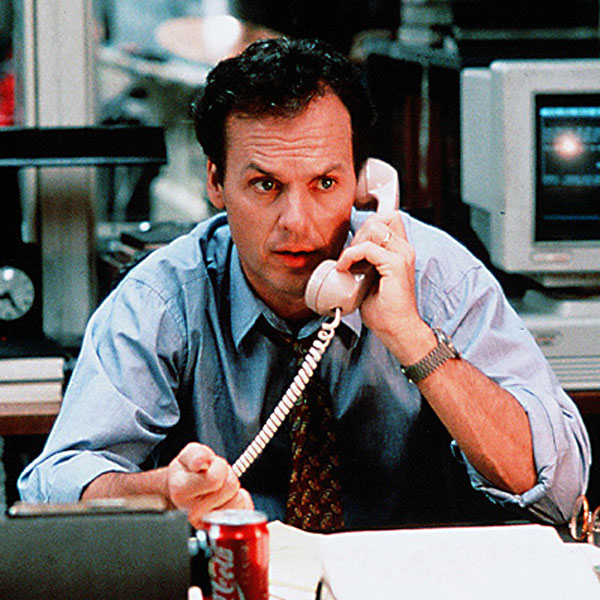 Early every morning for years, I've stumbled outside, frequently clad only in boxer shorts or a bathrobe, and picked up the Austin American-Statesman and The New York Times. Thus my day begins. I love newspapers, dailies, weeklies, good ones and bad ones (on long road trips I've been known to buy dozens). The Paper, Ron Howard's new movie, is about a day in the life of Henry Hackett (Keaton), metro editor of the New York Sun, a feisty tabloid modeled on the New York Post and the Daily News. Under pressure at his always high-pressure job, Hackett has been offered a job at the New York Sentinel (The New York Times) and has a very pregnant wife (Tomei) who very much wants him to take it. If you avoid the ridiculous proposition that an editor would rather work for one of those always nearly fatally stricken New York tabloids than The New York Times and the contrived melodramatic structure and conclusion, The Paper is a very modern comedy with a classic Thirties screwball/newspaper comedy sense of pacing and rhythm. Racing along as the story unfolds, The Paper's contrived plot is of much less interest than its portrait of Keaton's daily job… his daily life of putting out a newspaper. The chaos, the confusion, the ongoing struggle between personality and purpose, The Paper really gets the beat, gets how a paper comes together and the beat at which that happens. Detailing the evolutionary process of how that which begins with people thinking and talking ends up as a processed wood and ink product in your hands, the most important transitions, this film makes clear, are conceptual and ideological. In a time when glib cynicism has become accepted as significant social commentary of the day (everything sucks, everybody sucks, everybody's corrupt), Howard details a world full of professionals. Most of them doing the best possible job against overwhelming odds but actually achieving some success -- not just journalists but cops and doctors, pressmen and city officials. It is a world, just like the real world, and not the lazy Hollywood depiction of a too corrupt society, full of people working hard, that is the daily reality of this country. It is a world where ethics, morals and pride in one's work are of immense value. It is a conflicted world, I don't want to make this sound like Pollyanna of the Presses, but it is a world of possibilities. The giddy joy of the dialogue - this is a word-rich, witty film and the silly plot almost loses the point. But the terrific performances remind us that this world, in its own way, works, and our responsibility is to do the best job we can. Keaton's thoughtful turn makes a basically moral, constantly beleaguered, often manipulating, always dealing managing editor come across as a hero, a decent man for the times. The rest of the cast is great from the big parts -- Close, Tomei, Quaid, Duvall -- to the smaller ones and cameos. Notable in the latter are Alexander, Howard, Robards and especially O'Hara as a bored housewife drinking herself away while warning pregnant Tomei of the professional suicide of having children, and Gray as a marvelous prig who works at the Sentinel (Times), making it viscerally understandable why someone wouldn't want to go work there. Michael Corcoran used to say that the Chronicle was like a hot dog, it tasted good but for certain you didn't want to know what went into making it. This movie gives you some idea of at least the more exciting parts of that process.