Sirens is a well-acted though prurient little tale set in 1930s Australia. The Archbishop of Sydney has asked the Reverend Anthony Campion to make a special trip to the mountain retreat of controversial artist Norman Lindsay to try to persuade him to withdraw from exhibition his painting “The Crucified Venus” that contains the offensive image of a nude woman. By Church standards, the British Campion is something of a hipster -- young, well-educated, free-thinking, recently married -- though common standards would see him as a prim and repressed soul. Campion brings his young English bride Estella with him to Lindsay's mountain hideaway and while there, she undergoes a sensual awakening. Though the film's events are fictional, Lindsay was an actual artist and the flap over his “Crucified Venus” is historical fact. Sirens was filmed at his mountain estate remotely located in the Australian bush. Lindsay's retreat is home to his wife and daughter and three lush models who parade about in various states of undress. A train derailment forces the Campions to remain at Lindsay's place for several additional days and during that time Anthony Campion debates aesthetics and morality with the artist Lindsay while his wife Estella falls under the influence of the uninhibited models and becomes tempted by the presence of a blind, naked man. Headed by model Elle Macpherson in her acting debut, these artist's models are portrayed as some airbrushed Playboy spread on “The Girls of Norman Lindsay.” They are supposed to be sirens but they come across more as a feebly soft-core pretense of art. The drama is intellectually schematic rather than viscerally felt which is a drawback in a movie about the awakening of sensuality. Despite this, the performances are excellent, especially those of Hugh Grant as the young cleric and Sam Neill (Jurassic Park) as the legendary artist. Grant manages to capture all the self-deceptions of a prude who thinks of himself as a hip guy. Sirens' director Duigan (The Year My Voice Broke, Flirting, The Wide Sargasso Sea) has shown these soft-core tendencies in previous films but nowhere is it as prominent as in his current work. Sirens, is unable to rise above its intrinsic prurience. 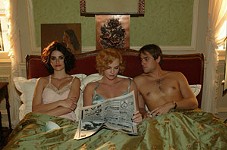