Set during the winter of 1942-43 in German-occupied Paris and wartime London, this French movie tells the story of the accompanists of the world, the people who are supporting players in other people's lives and never the stars of their own life stories. The Accompanist is about the love-hate relationships that develop between the stars and the supporting characters on the stage of life. It uses the performance stage of opera as a setting for its story. A gifted young pianist Sophie (Romane Bohringer) is hired by a beautiful and talented singer Irene Brice to be the singer's accompanist. Sophie gets swept up in Irene's glamorous life and benefits from the financial comfort that Irene and her husband Charles (Richard Bohringer) enjoy. It's quite different from the cramped and deprived life that Sophie shares with her mother. Irene in her exuberance and gaiety is everything that the taciturn Sophie is not. Thrilled by the trust Irene shows in her and by the confidences they share, Sophie is swayed to stay quiet about an affair she realizes Irene is having with a member of the French Resistance. Meanwhile, Charles has been able to maintain the couple's comfortable lifestyle by collaborating with the German occupiers, but that relationship is becoming increasingly uncomfortable. Taking Sophie with them, Charles and Irene escape to London but Sophie is also becoming increasingly resentful of her subordinate role. She discards a chance for marital happiness on the advice of Irene and once in London she becomes even more obsessed with the singer, following her clandestinely to her trysts. And Irene, in an attempt to not make her husband any more unhappy than he already is, only winds up by making him even sadder. The Accompanist is a well-performed and handsome-looking movie that is longer on idea than it is on delivery. It seems to have this central concept about accompanists in life but never really adds any new insights into the set-up. As such, the movie is more an abstraction than a story about living, breathing people. 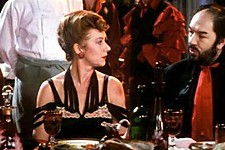