Written over 12 years ago by Ron Shelton (the writer and director of Bull Durham and White Men Can't Jump), the story of Blue Chips explores the moral boundaries of the college basketball court. It is directed by William Friedkin, who, at his best, combines great action storytelling with moral investigation (The French Connection, The Exorcist, To Live and Die in L.A.). Unfortunately, Blue Chips almost feels like two different movies, one devoted to capturing some great basketball on film and the other focusing on the path of moral compromises undertaken by the team's coach (Nolte). As always with Nolte's acting, you get a strong sense of unspoken turbulence churning beneath the surface. His usual beefy physiognomy is virtually dwarfed by the physical size of his young ballplayers, making him seem all the more diminished in moral stature as well. This coach has always played a clean ballgame, his players always graduated and almost always won each season. But then the team starts to slip and he feels the pressure to use unscrupulous recruiting tactics and bend to the will of the “friends” of the university whose network is quite comprehensive. To the extent it's allowed to develop, his dilemma is very real and interesting. Much of the movie's problem, I suspect, comes from the vast use of non-professionals in dramatic roles, whose charismatic abilities should be restricted to the basketball court and not the dramatic arena. There are gratuitous cameos by Larry Bird and Bobby Knight and larger-than-cameo roles by Shaquille O'Neal and Bob Cousy. The team players and other coaches are made up of other hoopsters and, though their abilities lend a lot of realism to the action sequences, their acting skills drag the movie's believability quotient way down. On the other hand, the performances of Mary McDonnell as the coach's ex-wife and Alfre Woodard as a ballplayer's ambitious mom raise the dramatic levels to such a degree that you might want to see the movie for their performances alone. The ultimate moral lesson we learn from Blue Chips is that a ballplayer's smile may be just the ticket when it comes to selling potato chips and Pepsi-Cola but it is insufficient to sell a dramatic bill of goods. 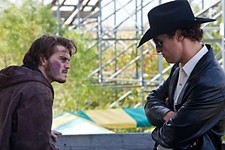