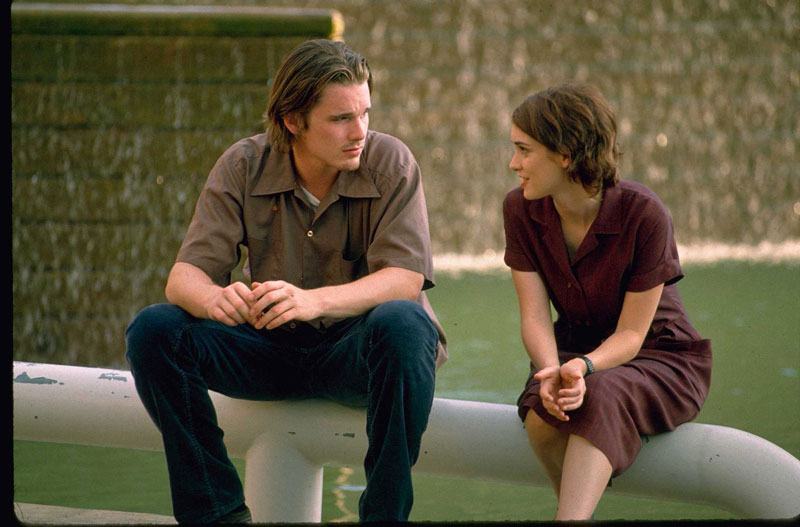 I guess if we have to have another movie about the angst-ridden twenty-something Gen X-ers, Ben Stiller is the guy to do it. After the unwarranted cancellation of his brilliant Fox TV show, Stiller has managed to make the leap to full-fledged filmmaker with apparent ease. He delivers this savvy, on-target glimpse into the lives of four young Houstonians that makes Cameron Crowe's recent Singles look like a tame also-ran. Like a lot of people in their mid-twenties, I find the increasing swell of marketing campaigns and pigeonholing off-putting, if not outright disturbing. Reality Bites taps into that annoyance and uses it as a springboard for a romantic comedy that often seems startlingly real. It's graduation day, 1994, and four friends gather under the video gaze of Lelaina (Ryder), the class valedictorian and aspiring documentarian who's currently holding down a makework job at the local access TV station, thanklessly production-assisting her butt off for the unctuous host of a Houston morning show, Good Morning, Grant! Her pals Troy (Hawke), Vickie (Garofalo), and Sammy (Zahn) are a motley collection of Gen X misfit/archetypes, a musician/slacker, an oversexed Gap manager, and an emerging homosexual, respectively. Most of the time, Lelaina spends her time trading barbs with Troy (whose band has the coolest name yet, “Hey, That's My Bike”) and skirting precariously around the edge of the Big L. When she (literally) runs into semi-slick TV producer Michael (Stiller) and sets in motion the process of romantic entanglement, Troy finds himself acting like a jealous boyfriend and frantically trying to get his life in order before he loses out for good. Behind all the romantic trappings of Reality Bites are a multitude of day to day truisms that most twentysomethings will instantly identify with: Big Gulps, The Gap, HIV screenings and the omnipresent fear of AIDS, Conjunction Junction, etc. It's Stiller's knowledgeable use of these smaller touches that (along with the excellent cast -- it's great to see Winona relinquishing period gowns and back where she can do some real damage) pushes the film along a solid, fresh line and toward its admittedly Hollywood conclusion. Stiller and company imbue their film with an honest, sarcastic wit that's all too familiar: apparently, somebody's been filming our lives. Does this mean we'll all be getting royalties?