In the Name of the Father

Pulse thundering in your head, a backbeat of blood that drowns out reason, the only thought you can form: “This can't be happening!” That's the feeling of Gerry Conlon, rousted from his Belfast home by British authorities, flown to London and unjustly blamed for the IRA bombing of a London pub, tortured into making a false confession, convicted, and imprisoned. And through this extraordinary film by director Sheridan (My Left Foot), we share Conlon's disorientation, shock, stomach in free-fall, lungs knotting until they hold no air. For in relating the true story of Conlon's wrongful conviction and 15-year imprisonment, Sheridan has used the tools of the filmmaker to evoke a visceral echo of Conlon's waking nightmare. Telling a tale naturally shot through with tension – the kind anyone who's stiffened at the sight of a cop car in the rear-view will relate to – Sheridan uses quick cuts, tight shots, and a pounding rock soundtrack (with music by Hendrix, Dylan, and Bono and Gavin Friday) to set a rapid drumming pace our systems absorb: we breathe faster, our blood begins to rush, our muscles wind tighter. If it were only for this sustained physical reaction, Sheridan would have scored an achievement as a thriller, comparable to Alien or The Silence of the Lambs. But In the Name of the Father is more than a massive adrenaline rush. It is an injection into a society at war, Northern Ireland and England in the Seventies (a sequence depicting a street fight between Belfast residents and British troops stunningly realizes the chaos of that world and the hatred firing it), and a compelling account of a son and father making their peace. Conlon's father Guiseppe is also convicted and jailed for the bombing and forced to share a cell with his son. Sheridan makes their coming together as riveting as any street fight or legal battle. The entire cast is inspired. Daniel Day-Lewis's Gerry Conlon is brilliantly realized – a loser, all slumped shoulders and suppressed rage who grows when he comes to see the decency in the father he'd written off as a weakling. Pete Postelthwaite's Guiseppe is a quietly beautiful creation, a man as strong in spirit as he is frail in body. And Emma Thompson blazes as the attorney who finally wins an appeal for the Conlons. She shakes with fury, a fierce angel of righteousness. Conlon's saga seems to have done to them what this movie does: gotten under the skin, into the bloodstream, and made it race. 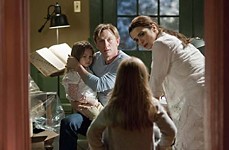 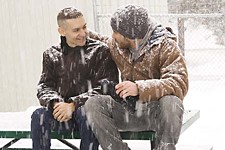