There are a lot of separate elements that, sometimes unto themselves, can make a great Western -- director, actors and script are the most obvious. More often than not, it has to be the combination of those three. Tombstone combines two of these three elements, brilliant acting (especially Russell, Kilmer and Boothe) and an interesting script, part grandiose mythmaking and part trendy revisionism. Unfortunately, in the hands of director Cosmatos, this combination produces not magic but, against the odds and Kilmer's best efforts, a mediocrity. The film begins like a Sergio Leone Western. Ignoring history, the Tombstone area is controlled by a red scarf-wearing band of 100 outlaws called the Cowboys. Into town ride the Earp brothers and family. Wyatt (Russell) and Virgil (Elliott) are retired lawmen determined to turn their energies towards commerce. But the wanton violence of the Cowboys finally drives them back into the arms of the law. The film may seem to be influenced by Leone and Peckinpah but the auteur hand here is Sylvester Stallone, with whom Cosmatos worked on Cobra and Rambo: First Blood Part II. The narrative is random but punctuated by brilliant action scenes, rather than constructed of them. In the face of all logic, the focus is constantly on one man and the indignities he suffers until, finally, he has been so wronged that any vengeance is warranted (in this case, including shooting men in the back and blowing the brains out of unarmed bandits). It seems we hurry from exposition to romance (the women's roles and actresses in this film are equally dreadful) to some great action scene, lacking both taut storytelling and poetry. This is not an evolving story, this is a haphazard parade of memories badly explained and tied together that goes on for way too long. This said, Kilmer as Doc Holliday and Russell as Wyatt Earp almost triumph over the wandering narrative and badly paced drama. As the dissipated poet killer, Kilmer's Doc Holliday is mesmerizing, truly an outlaw of legend. Russell is so much better than the film; you feel for him, he's acting the hell out of this mess. In general, again except for the women and that's a big exception, the cast is splendid and there are some truly classic scenes here -- especially a confrontation between Kilmer's Holliday and Biehn's Johnny Ringo. But the film is a mess, there are two or three pre-climaxes but no climax. Its values are capitalist rather than renegade, which is okay if it's metaphoric rather than literal. Worse, as much as these actors heroically struggle to focus the film, the director more successfully hacks it apart. But if you really love Westerns, despite its faults, it's got to be recommended for Kilmer's performance alone. 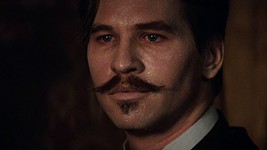