All the President's Men meets The Parallax View by way of John Grisham. Pakula returns once again to the fertile fields of conspiracy in high places (perhaps he should think about teaming up with Oliver Stone) to adapt the Grisham best-seller to the screen. Back from a long absence, Roberts is Darby Shaw, the Tulane law student who devises a theory on the recent assassination of a pair of U.S. Supreme Court justices and summarily records it in the titular brief. By way of her mentor/lover Shepard, the brief makes the rounds in Washington, popping up in hushed conversations at the CIA, FBI, and, eventually, the Oval Office. And then, of course, people start dying, specifically people overly interested in the Pelican Brief. Into the picture steps Washington Post maverick reporter Gray Grantham (Washington), who, like Pakula heroes Woodward and Bernstein, smells a story of epic proportions. Determined to discover the connections between Shaw's too-close-for-comfort brief and the reality of what may have happened, he teams up with the student despite the protestations of his editor (Lithgow, in little more than a cameo role), who admonishes him with the reminder, “Good help is hard to find.” To be fair, Pakula's film is beautiful to look at; it has all the visual hallmarks of a major holiday hit, including sweeping camera work that shows off both New Orleans and the District of Columbia to their fullest, breathtaking degrees. Cinematographer Stephen Goldblatt keeps the film's sense of impending menace in the fore with dark, ruddy Washington interiors and claustrophobic corridors of power. Unfortunately, The Pelican Brief comes across as a prolonged bout with deja vu: you know you've seen this before, and more than once at that. Grisham's novel was no landmark of literary originality to begin with, but Pakula streamlines the story into a corner, and then lets it run 30 minutes longer than necessary. There's no doubt that this film may end up breaking a few holiday box office records, but that, unfortunately, says more about today's audiences than about the movie itself. Klute
Fonda (who received an Oscar) and Sutherland are at the top of their game in this mystery/thriller that also provides a fasinating look into the ... 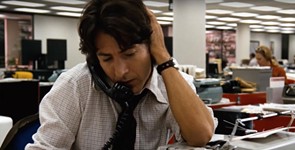 All the President’s Men
The Texas Union Council presents a semester-long series co-sponsored each week by a different TUC committee; this week’s program is co-sponsored by the Student Interests ...