We're Back! a Dinosaur's Story

In a blatant attempt to milk as many box office receipts out of the current dinosaur mania as possible, Steven Spielberg (as executive producer) offers up an animated alternative to Jurassic Park that is targeted especially for kids -- a kindlier, gentler perspective where these creatures of long ago are redefined as cute, cuddly, lovable characters á la Barney. Four dinosaurs are abducted during the prehistoric era by a Captain NewEyes in his time-traveling airship. The dinosaurs -- Rex, Elsa, Dweeb and Woog -- are fed the Captain's special “Brain Grain Cereal,” and their IQs are dramatically raised to the point where they can speak and feel emotions. Captain NewEyes offers the quartet a chance to travel to the future with him, where millions of children are waiting to meet them -- especially Louie, a lonely New York street urchin who longs for friends of his own, and Cecilia, a lonely, money-doesn't-buy-happiness little girl whose affluent parents never seem to be around. Besides a very worn, formulaic narrative whose preachy underlying message screams “there's no place like home,” this film is filled with a lack of originality, such as mixing some stylistic elements from Tim Burton and Hitchcock, and turning it into a second-rate rip-off of Disney's The Jungle Book. The animation is also blandly average, whereby all the human children look the same, regardless of race or sex -- much in the manner of the wide-eyed, turned-up nose look found in cheap, tacky Japanese animation films. But the worst to be seen is the flagrant self-promotion that Spielberg stoops to throughout the film. Mercifully, this feature is only about 80 minutes long. It probably won't frighten kids, but it might bore them instead. 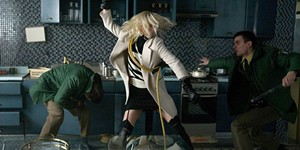 Atomic Blonde
Spies duke it out in Cold War-era Berlin