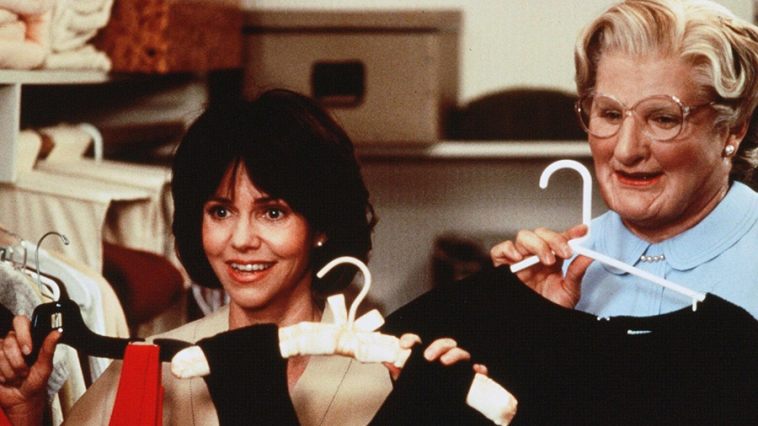 Imagine a “lost” episode of Gilligan's Island in which Gilligan, feeling neglected, dons a dress, wig, and lipstick and passes himself off as a newly-shipwrecked debutante. He fools everyone until he tries to be both him and “her” at a dinner and bumbles switching identities. Now you have the precise level of sophistication powering this new “comedy” from director Columbus (Home Alone). He and co-writer Leslie Dixon (Look Who's Talking Now), no strangers to aiming low at audience IQs, shoot off the bottom of the charts here. With co-writer Randi Mayem Singer, they take an inane premise – divorced dad, restricted to once-weekly visits with his kids, masquerades as elderly British widow to spend more time with them – and so load it with imbecilic characters, strained coincidences, and blatant continuity gaps that any self-respecting second-grader will feel her intelligence has been insulted. Williams (also one of Doubtfire's producers) is Daniel, an actor with an inner child the size of Montana who's baffled when his type-A wife (Field, as a woman dim enough to make Sister Bertrille seem a Nobel nominee by comparison) calls it quits after 14 years of his immaturity. With his makeup artist brother (Fierstein, whose character is gay, apparently just to score cheap laughs), he concocts the painfully elaborate Doubtfire guise, complete with body suit and latex mask. A thinking moviegoer might suspect Daniel is initially a jerk so Mrs. Doubtfire can be the alter ego who draws out his maturity. But Doubtfire never gets her own identity; Daniel is always there, just under the rubber, jealous of his ex's new beau (Brosnan) and making bizarre comments to discourage her from dating him. We're forced to watch this jerk be a jerk in both sexes, albeit with repeated reminders of how much he adores his kids; for every scene of Williams being “funny,” there's a lengthy shot of him gazing moist-eyed at his brood. His scheme unravels, yes, at a dinner where Daniel tries to be himself and Mrs. Doubtfire simultaneously and … you know. It's handled so preposterously – with Daniel making complex costume changes in seconds – it makes Gilligan appear the hallmark of realism. Only, this movie hasn't the nostalgia factor of a silly Sixties sitcom to make it easier to swallow; it's just raw, uncoated stupidity that sticks in your throat.