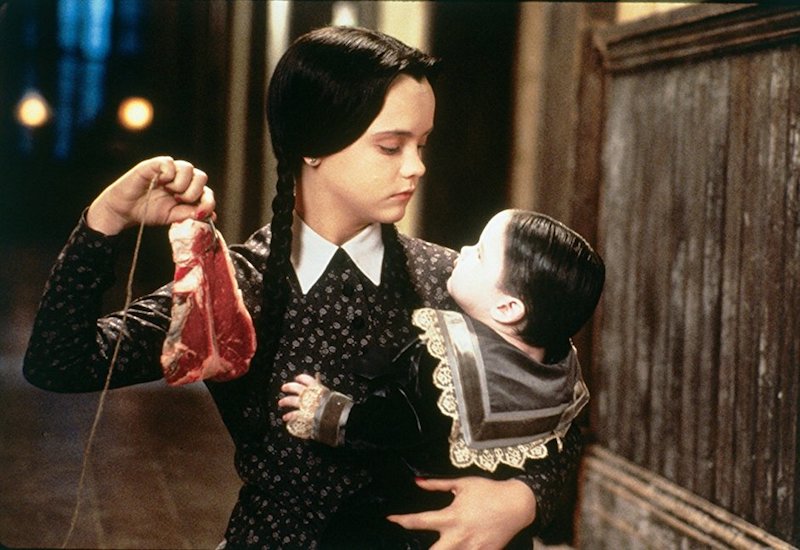 It's a telling point to note that the most interesting thing about visiting the Addams clan again was the drunken business major sitting in front of me, and even he only stuck around for the first half hour. This time out, the family is graced with a new addition, in the form of baby Pubert, a fire-breathing, trouble-prone tot sporting his father's trademark moustache and well-lubed hair. New cast member Joan Cusack is also on hand as Debbie, the family's scheming nanny and Uncle Fester's love interest. As in the original film, this blonde outsider is only after the Addams's fortune, and after her whirlwind courtship and subsequent marriage to Fester, she hurriedly begins devising various ways to off her hollow-eyed mate and thereby secure her financial future. Meanwhile, young Wednesday and Pugsley are packed off to summer camp, where, to their horror, they find themselves surrounded by scores of insanely chipper blonde and blue-eyed kids and counselors. Wednesday manages to make the best of a lousy situation by striking up a summer romance with the only other eligible misfit there, a frazzled-looking young boy with the semi-clichéd name Joel Glicker. With all these disparate plot lines going on simultaneously, the film can't help but fail all the way around. Sonnenfeld and company (and not a few critics to boot) have made much about the superiority of this story over the previous one, but it's all so muddled, that you end up feeling like you're in one-liner hell (with no Schwarzenegger/Willis/Joel Silver lackey in sight). While the first Addams outing had the reserved charm of Charles Addams's New Yorker strips (from which it borrowed heavily), this time out the humor has acquired a frosty, malicious edge -- at times, the gags are positively mean-spirited. Granted, Julia, Huston, Ricci, and Workman are all excellent in their roles (Carol Kane as Granny Addams seems little more than an afterthought), but they're unfortunately not enough to save this elongated mess. If you haven't yet seen the first film, rent that instead, or, better yet, go pick up a volume of the original Addams cartoons.