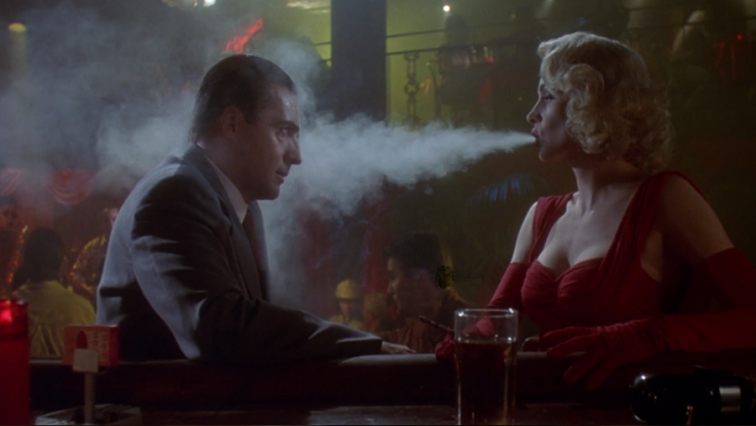 Director Reiner (All of Me, Sibling Rivalry) takes -- ahem -- a stab at parodying those wacky ice-pick thrillers of the Nineties and barely breaks the skin. He and screenwriter David O'Malley tackle such sex 'n' slash favorites as Fatal Attraction, Basic Instinct, Sleeping With the Enemy, and Cape Fear, tie in a few of their cinematic predecessors -- naughty noirs Body Heat and Double Indemnity -- and subject them all to the Airplane!/Naked Gun treatment -- transporting the characters to cartoonland for some barn-door broad, reality-bending, aggressively stupid gag-a-ramas. The result is pretty much what you expect: some really dumb stuff that will make you laugh and a lot that won't; it's Mad Magazine without the blinding satirical insight. Stupid humor is a mysterious art; so often, one man's giggle is another man's yawn. I'm at a loss to tell you why I was so amused by the Fatal Attraction bit that had Sean Young riding a roller coaster with a skunk -- as I write this, it sounds impossibly idiotic -- and didn't crack a smile at so much else in the film. Finding a dumb gag that everyone will enjoy is tough, and it's darn tough to fill an hour and a half with high-quality dumb gags (now do you understand why those cartoons were only ten minutes long?). That said, and given that the creators lean too heavily on the viewer's familiarity with the films being spoofed, Fatal Instinct still manages somehow to be likable. Credit the actors, all of whom contribute dandy work, far beyond the level of the material. Leslie Nielsen's Frank Drebbin has nothing -- in the way of intelligence, anyway -- on Assante's cop/lawyer Ned Ravine. Assante keeps his character so dense that it appears his neural connections take place in another county. His hilarious thickness survives every lame joke he encounters. Likewise for Kate Nelligan's Lola Ravine, the Double Indemnity-esque spouse who's scheming with lover Chris McDonald to bump off her heavily-insured hubbie. Nelligan wallows in the role of the temptress, and down to the shake in her shoulders, she's Barbara Stan-wicked. Young, Fenn, and McDonald all contribute great supporting work here, in fact, the best kind of work for this kind of film: straighter than straight, dead serious. It makes these chowderheads that much funnier -- and makes you wish a cast this good were being served by classier material.

The Jerk
The Jerk reigns supreme in the movies-about-really-stupid-men department.