The Ballad of Little Jo

This conscious attempt to put a new spin on the Western offers a little seen perspective on the American frontier. Inspired by the life of a real woman, The Ballad of Little Jo tells the life story of Josephine Monaghan (Amis) who is banished from her father's home in 1866 after bearing a child out of wedlock. Leaving her child in her sister's care, Josephine heads West to find her future. Quickly she discovers the perils that await a woman alone, and in a quick-fix survival technique, she dons men's clothing -- which, at the time, was illegal to do -- and, before she could plan it, the charade stuck for life. She adopts male mannerisms and gradually becomes a respected member of the community, which christens her with the name Little Jo because of her slight build. Still, that does not interfere with her being able to do a man's work, though the community does find her curiously aloof and uninterested in sex. At one point, Jo rescues a sick Chinese railroad worker from a mob's noose and is forced by the crowd to take the man in as a servant. These two renegades develop bonds and share secrets that support Bob Dylan's contention that "to live outside the law you must be honest." It's clear that all involved in this project desired to present some female truths about the Old West and in its rigor to present that which has been previously invisible, The Ballad of Little Jo is always fascinating. Yet those desires, at times, cause the movie to be a bit too didactic and presentational rather than dramatic and involving. Director Greenwald's familiarity and love for the classic Westerns are evident and one wishes that she had followed more of their influence in presenting their spacious panoramas and images of individuals at odds with burgeoning civilization. (Interestingly, Greenwald's previous project was The Kill-Off, a quirky film adaptation of a story by the very male-identified author Jim Thompson.) As it is, Little Jo is shot mostly in close-ups that would make it almost more appropriate for TV than for the theatre. Another quibble I have with this movie (though I would watch Suzy Amis in virtually anything she does -- she's the only reason to watch Rich in Love) is that Amis's demeanor is a bit too feminine to be believably androgynous. I had a hard time accepting that, throughout Jo's lifetime, no one discovered her secret. But cross-dressing in movies has come into vogue these days, witness Orlando and The Crying Game. And if that's what it takes to promote The Ballad of Little Jo, then so be it, because it's an adventurous and exciting work that shows us a great deal about pioneer women, be they outlaws in the Old West or visionaries of the New Frontier. 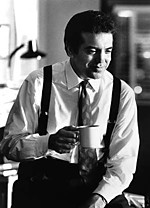 The Usual Suspects
A modern classic with style to burn.