Young Druids in Love. Anthony Hickox, who seems to be making quite a name for himself in the bad sequels department (his Hellraiser III seriously missed the mark), returns to the director's chair with yet another exercise in how to make muck of a horror film. Reborn in modern New York (where else?), the black-clad Warlock (Sands) is on a mission to collect five magical runestones that will help free his Satanic dad and let loose the apocalypse. Massing against him are the forces of good, an aging band of Americanized Druids and their unwitting teenage offspring (Marshall, Young), the mystical Druidic Warriors who must destroy the Evil One, and... this sounds silly, doesn't it? It is. Lifting whole passages from George Lucas's Star Wars (the young hero here might as well be named Skywalker for all the similarities), we're treated to extended scenes of the young warrior in training, using his own special version of the Force to blow up trees and zoom baseballs around. Alas, Alec Guinness is nowhere to be found, and the heroic pair have quite a time of it, trying to stave off Armageddon and lose their virginity all in the space of a few days. Sands, as always, is nicely chilling in this odd little role that seems tailor-made to his sensibilities. Director Hickox serves up liberal dollops of grue along the way as the Warlock journeys from New York to California, leaving a trail of living-impaired victims in his bloody wake (his hostile takeover of a Yellow Checker Cab and its driver is a nice touch). Hickox unfortunately packs this overlong clunker with enough wooden dialogue to burn a whole coven of witches, not to mention plot holes that gape wider than sucking chest wounds (of which there are several). And to the women who wanted very much to know: Mr. Sands' bare bottom is not on view this time out. Bummer. 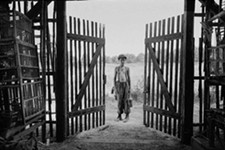