This hodgepodge of little stories about the members of a college football team contending for a championship is flaccid seasonal fare that will do all right its first few weeks at the box office amongst those starved for gridiron action but will fade from memory long before the Rose Bowl parade ends (unless, of course, it makes a quick transfer to video, in which case it will be holiday fodder between beer and bowl games). The movie suffers primarily from a lack of overall focus and direction. It is called The Program after all, and, therefore, we might expect some general insight into NCAA football practices. All the movie ever conveys are some fuzzy sentiments about college programs that allow their star athletes to coast through academic requirements and ignore player steroid abuse and under-the-table financial sponsorships. Hardly any shattering revelations here and certainly no blame-placing. What we're left with are the individual stories of the players, most of whom come off seeming a tad too old to believably play college students. There's Joe Kane (Sheffer) who, despite making the cover of Newsweek as a Heisman Trophy contender, has a self-destructive streak that's stoked by his drinking problem and unresolved feelings for his dad. The brightest contribution to the movie is Epps's performance as Darnell Jefferson, the raw recruit who figures things out as he goes along. Other characters include the steroid junkie (Benrubi) whose usage is ignored by everyone until it causes felonious social behavior; the poor, virtually illiterate player (Davis) whose NFL dreams are shattered along with his leg; and the women (Berry and Swanson), who function as little more than love interests. Then there is the coach (Caan) who is mostly inscrutable as he juggles the demands of his team and their personal problems, the college administration and donors, the NCAA nitpickers, his expelled daughter, checking urine samples... well, with stress like that, you can hardly blame him when he dramatically pitches a whole table of Gatorade setups. Since The Program was co-scripted by Aaron Latham (an investigative journalist whose film scripts include Urban Cowboy and Perfect), it's reasonable to have expected a more hard-hitting scrutiny of its subject. Perhaps things got waylaid by co-screenwriter and director Ward whose previous two films are Major League and King Ralph, forever obscuring the fact that once upon a time he won an Academy Award for penning The Sting. 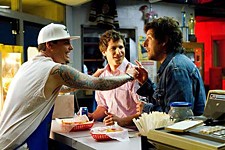 That's My Boy
Casting Adam Sandler and Andy Samberg as father and son is a stroke of inspiration, but there's nothing else cute about this comedy.