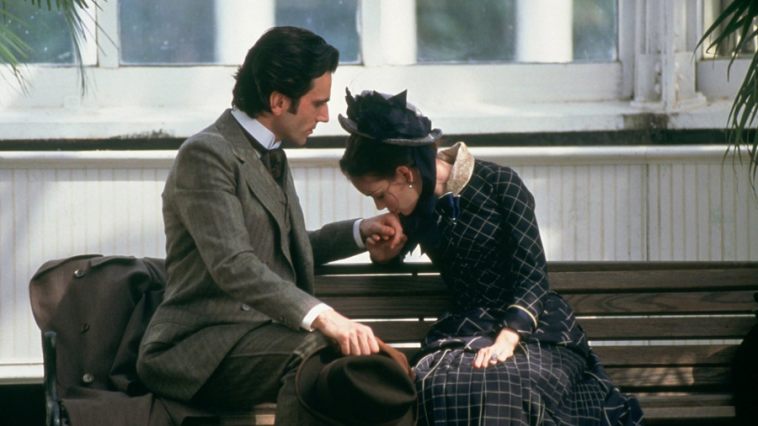 The Age of Innocence

I suppose I never had enough unrequited angst percolating through my high school years to take full pleasure in the works of Edith Wharton. I may have worn black 90 percent of the time, but Victorian heartaches quietly passed me by in favor of my school's requisite coterie of female poetess/pariahs. Lucky me. Stepping out on a bit of a limb, Martin Scorsese has adapted Wharton's novel of a man caught between two very distinct women and the proprieties of the time to the screen, with mixed results. Age of Innocence is brimming with the director's stylistic touches: slow motion, lap dissolves, a number of highly identifiable recurring motifs, and an exquisite attention to period detail make this not just a beautiful film to behold but also a sumptuous, shining tribute to the art of superior cinematography and film craftsmanship. It's like sitting down to the most magnificent repast you've ever had, gorging yourself on the sheer perfection of it (indeed, what with all the scenes of society dining we're treated to, it's a wise idea to enter into the experience with a full belly). Despite all these cumbersome appointments, however, there's something integral missing here, or perhaps there's too much of something else. It's hard to identify, actually, what went wrong, but as evidenced by the profoundly loud yawns from the couple seated behind me, this Age of Innocence is (and I never, ever thought I'd find myself saying this about any Scorsese film) a bore. Despite the uniformly excellent performances by Day-Lewis (who's beginning to sound more and more like John Malkovich these days), Ryder, and Pfeiffer -- as Newland Archer, his fiancée May Welland, and the Countess Olenska, respectively -- the film leaves you with the feeling, once again, of having enjoyed a lovely meal fit for royalty only to discover, too late, that the fruit was made of wax and the roast was little more than a Styrofoam mock-up. You've got ennui between your teeth, dear heart, so go floss. At two hours and 13 minutes, Scorsese has allowed himself enough time to follow Wharton's book to the letter, and also enough time to include long stretches of painfully wearisome society functions and banter. As a period piece, it's a joy to behold, but with such an indecisive little newt of a protagonist, it's just hard to give a damn what happens.