For once, it's good to see an actress step into the lead role of an action-adventure film -- a place that is usually reserved exclusively for men. But on the other hand, it's not so good when the actress is miscast in the lead, and as a result, is not very convincing. Such is the case for Mulcahy's (Highlander, Ricochet) film, which could have had the potential for being a gripping exercise in the “pulling the big heist” genre but, instead, is a dull, dragged-out narrative filled with holes that generate only a thin layer of suspense and two-dimensional characterizations. The film begins with Karen McCoy (Basinger) -- supposedly, infamous, highly-skilled cat burglar who specializes in robbing banks after hours -- getting busted for attempting to rob a prestigious bank in Atlanta. The next thing we know, McCoy is released from prison and placed on parole (and Basinger looks more like she's just stepped away from a make-over at the Clinique counter than having done six hardened years at the Georgia State Hilton). All McCoy wants to do is to return to Atlanta to be with her young son (English), who lives with her ex-husband, and begin a new life by going straight. Now, wait a minute. Inquiring movie minds want to know, how was it possible for Basinger's character to have once been a full-time cat burglar, as well as a full-time mother and wife? Chalk it up as a big hole in the narrative, folks. McCoy finds life outside prison to be a tough go, for no one wants to hire her due to her ex-con status, but she is constantly complimented for having “kept her figure” while doing time (well, she is the beautiful Kim Basinger and does not fit the real image of your average, been-to-hell-and-back, female ex-con). Finally, McCoy's slimy, sweaty, obese parole officer (Sartain) offers to help her out, but only puts her in the clutches of her former associates (Stamp) -- a crooked real estate tycoon -- who blackmails her into pulling another bank job by kidnapping her son (just how McCoy is connected to Stamp's character and how the parole officer fits into his shady dealings are yet other unexplained black holes). McCoy agrees to do the job, provided that an inept, good-ol'-boy criminal wannabe (Kilmer) is allowed to assist her (and surprise -- Kilmer's character just happens to be a cousin of Stamp's). Aside from the holes in the narrative, none of the characters have any depth to them, leaving us to ponder just what is behind their motivations. If you're looking for the thrill of a good bank robbery film, this ain't The Real McCoy. 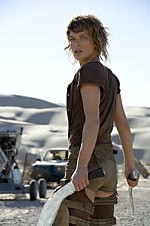