You know you're in for something different when the main character's first line of dialogue is a nerve-rattling “Fuck you!” directed squarely at the audience with all the violent intensity of a sonic boom. So begins this Australian import that chronicles the (downward spiraling) life and times of a gang of Melbourne skinheads. Led by the charismatic Hando (Crowe) and his right-hand thug Davey (Pollock, who tragically committed suicide shortly after completion of the film), this aimless band of neo-Nazi hooligans spend 90 percent of their time protecting their turf by beating the daylights out of the Vietnamese immigrants whom they see as “invaders” in their homeland. It would have been so very easy to make this just another crash-and-burn action flick with a political edge, but director Wright wisely chose to imbue these disturbing characters with odd bits of charm and humanity: if not for the wayward drift of their cause, this motley group of super-patriots would be almost heroic by sheer virtue of their unshakable beliefs. When Gabe, a privileged young female runaway, joins up with the skins. their center begins to fail -- her love for the stoic, supremely violent Hando gradually shifts to the more human Davey -- and the group splinters (it doesn't help things either that the local Asian community is out for blood as well). If Romper Stomper reminds you of anything, it might be Kubrick's A Clockwork Orange. The ultra-violence in this film has a gritty, in-your-face feel to it that makes you want to flinch and turn away, repulsed. Shot in 16mm, the film makes excellent use of that format's portability, putting the camera right in the middle of thudding fists, Doc Martens, and blood, eschewing traditional camera angles in favor of odd, violent set-ups that leave you feeling winded and numb. Despite the fact that Romper Stomper won nine separate awards down under, there's been much hue and cry regarding the film's overall grim tone and nonstop scenes of carnage (here in the States, it's garnered an NC-17 rating). It is violent, certainly, but it's also a genuinely excellent film, horrifying and touching and beautiful in a bloody sort of way. A bit like real life, really. 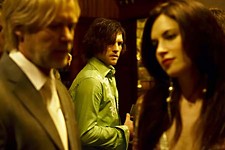 Macbeth
This Australian film puts a modern, hyperstylized spin on an old tale: Should it be, "Out, damned spot" or "Off, damned Ray-Bans"?