As the title suggests, this nearly three-hour long documentary focuses on the work of MIT linguistics professor Chomsky, a man who is not only one of the most brilliant intellectuals of our time, but also a strident political activist, so much so that he has been more or less sidelined by the press and his colleagues for his (seemingly) radical viewpoints. As this engrossing, exciting film reveals, though, there's really nothing radical about Chomsky's ideas in the first place: he's simply honest enough to call our attention to the obvious flaws in the American system of living and offer examples of how we might, well, fix things. Chomsky's theories of “intellectual self-defense,” that is, the notion that people must arm themselves with both knowledge and cogent thinking in order to take the country back from its current, less-than-glorious state, sounds so obvious that it's a wonder anyone should even have to bring up the idea in the first place. Split into two halves with an intermission in the middle, directors Achbar and Wintonick wisely include ample footage of Chomsky's critics (a piece with William F. Buckley is especially sardonic, what with Chomsky's Everyman armor repelling the unctuous, vitriolic barbs the columnist sends his way), as well as endless scenes of the Master Linguist speaking in crowded lecture halls and to journalists around the world. This is not to say that the film is in any way boring, it's far too well-assembled to be that. In fact, as far as “educational” documentaries go, this may be one of the best. Not only is it consistently entertaining and occasionally downright hilarious, it honestly makes you think. What more could a documentary do? 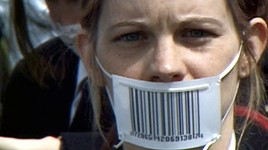 The Corporation
An immensely informative and provactive documentary about the growth of corporate entities within the legal sphere, marketplace, and human imagination.