Hold Me, Thrill Me, Kiss Me

Move over, John Waters and Paul Bartel. There's a new, fresh auteur on the guilty pleasure/psychotronic/cult film block. A one-time actor turned budding director and writer, Hershman successfully borrows some of the off-beat satirical ingredients that Waters and Bartel have been known for, and manages to turn out a hilariously trashy, raunchy, dark, and thoroughly entertaining film that is uniquely his own. The narrative opens with Eli (Parrish) accidentally shooting his bride-to-be, Twinkle (Young) -- a gun-toting, high-strung, harpy-of-an-heiress -- during a brawl outside a justice of the peace office. Eli flees with a satchel filled with thousands of Twinkle's dollars to El Monte, California where he hopes to obtain a new I.D. from a false identity broker by the name of Mr. Jones (Leary). On his first night in El Monte, Eli hooks up with Sabra (Naschak), a topless dancer who takes him back to her hot pink trailer at the run-down, chic Hide Away Trailer Park, and proceeds to turn him into her sex slave for the evening -- after she chucks her teenage sister Dannie (Shelly) out on the pavement to sleep. Eventually, Eli (who now tells everyone that his name is “Bud”) learns from Mr. Jones that it is going to take several weeks to obtain the necessary papers for a new identity. So, Eli/Bud decides to take up temporary residence at the Hide Away, where he soon catches the attention of a middle-aged southern belle (Ladd) who wants him to “come over and fix her plumbing sometime,” as well as an elderly, washed-up Hungarian opera diva (Suli) who lives with her foul-mouthed, money-grubbing son (Lehoczky), and who just happens to discover that Eli/Bud has a pile of loot buried next to his trailer. And in the midst of all this trailer park tackiness, a sweet, tender love story begins to blossom between Dannie and Eli/Bud -- much to the chagrin of the libidinous and viciously jealous Sabra. The strong points of Hershman's film are his wonderfully wacky story in combination with a terrific, top-notch cast whose performances easily render credible, slice-of-life images of life in the lower-class lane. There is also a great musical soundtrack to accompany the film, with songs by the Cramps, the Pixies and Violent Femmes, among others. Hold Me, Thrill Me, Kiss Me is pure Hide Away heaven. 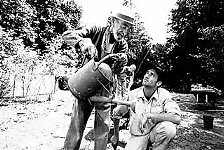 Greenfingers
Just into the opening credits, as a forgettably peppy song plays on the soundtrack, the screen spells out a cringe-inducing caveat: “This story is inspired ...