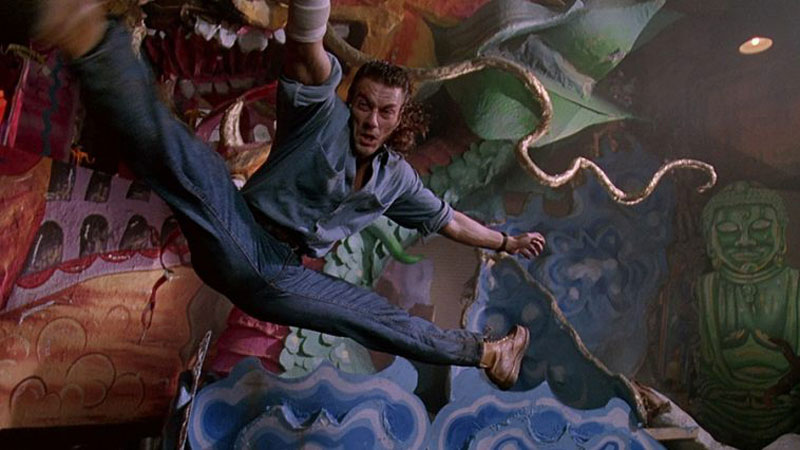 Stop holding your breath. John Woo's American debut is as thoroughly a “John Woo Film” as any of the director's Hong Kong actioneers, with few if any compromises made in the way of bullets, bodies, and overall mayhem. Basically an updating of The Most Dangerous Game, Van Damme is Chance, a wandering combat veteran who finds himself the target of a methodically amoral group of “hunters” who offer similarly talented individuals $10,000 to act as human prey for their wealthy clients. Van Damme -- ever pissing off the forces of evil -- doesn't even receive the cash offer; head killer Fouchon (Henriksen, in another brilliantly shaded portrait of cool villiany) decides to off this annoying little vet sans recompense. Ideally set in New Orleans, the film is almost pure Woo, overflowing as it is with his trademark candles, doves, and 9mm semi-auto muzzle flash. Literally thousands upon thousands of blank rounds were expended during the making of Hard Target, and you can bet it shows. Woo, well known for his almost obsessive attention to detail, has layered the audio tracks to create some of the most, well, explosive-sounding explosions ever heard on film. To be fair, this isn't The Killer. Woo's unique penchant for over-the-top male bonding is basically nowhere to be seen, but then this is, after all, a very American story, despite Woo's name at the top. Instead, we have Yanci Butler as the young lady who enlists Chance's aid in discovering who killed her father. Thanks to Chuck Pfarrer's well-thought-out script, Butler's character is far more fleshed out than most of Woo's female leads. Too often, they end up becoming just so much shrieking background scenery; it's a nice change of pace to see a strong, competent woman in a John Woo film. If you've never heard of the man, this is your chance to see what all the buzz is about. And just ignore Wilford Brimley, who “turns in a salty, lively performance as Chance's crafty Cajun uncle.” Um, sure... whatever.