Under Seattle's sorrowful skies, an ex-con struggles to build a clean life with a 14-year-old son in tow. Their life is one of rent-by-the-week flophouses, mattresses on the floor, cab drivers, petty thieves, and teens who sell themselves to strangers. Heart wallows in the world of longtime small-timers and, like Tom Waits's whiskey-soaked ballads, exposes the sadness in its lost lives. and celebrates them; it's a loser's rhapsody. Bell, director of the documentaries Streetwise and Tiny at 20 (chronicles of the dead-end lives of urban youth), comes by the material honestly and gives this film a convincing grit; you feel the week-old dirt under its fingernails. Bridges is impressive as Jack, the ex-con who can't quite shake his deceiving ways and cons even himself into believing he can make it up to Alaska -- Jack London territory -- and a fresh start. But it's destined not to happen, and we know it. American Heart's greatest flaw is its predictability. As with so many tales of this kind, the characters are foredoomed to failure, no matter what their virtues or how hard they work to stay clean. If they drink, they'll fall off the wagon. If they have a job, they'll lose it. If they're a criminal, they'll be tempted back to crime. Heart makes good on all these setbacks. Yet in all but the most predictable moments -- i.e., those in which you sigh and wait for that tragic gunshot that's bound to come -- Bell serves up this downward spiral with an earnestness that keeps you watching and hoping that somehow these losers will catch a break, that their pipe dream of Alaska will materialize. The film's most compelling element is Furlong's lost adolescent, Nick. He's perched on that impossible ledge between childhood and adulthood, wrestling with the emotions of both. Furlong plays him with a poker face, one which ever so rarely flashes the child's desire to please Daddy and the teen's distrust of an adult he knows to be a liar. We come to see in his stoicism a monumental effort by a young man to protect his heart and sustain some faith in his father. We realize how hard he's trying to hold it together and feel a piercing sadness. The song of the loser is an old one, but it's sung here with feeling, enough to make this American heart break. 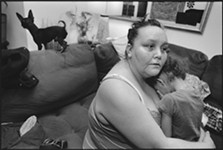 Tiny: The Life of Erin Blackwell
...