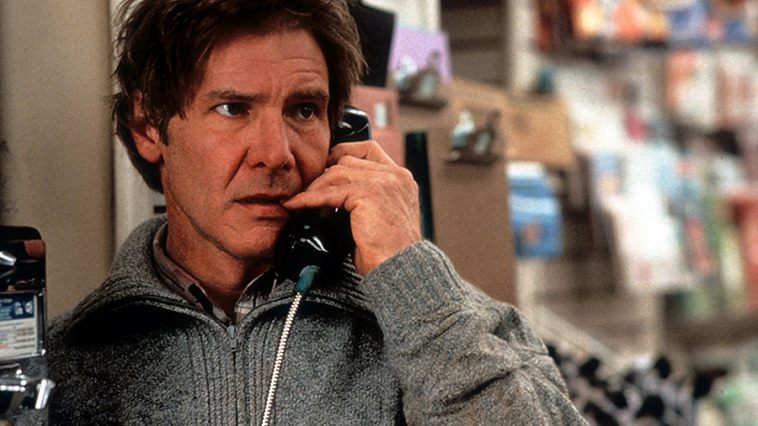 One of the first in what appears to be a yearlong spate of motion pictures based on old TV shows (coming soon to a multiplex near you: The Flintstones, The Beverly Hillbillies, Cop Rock: The Movie), this flighty offering from Andrew Davis (Under Siege) updates the popular early Sixties “Quinn Martin Production,” with Harrison Ford in the role of Dr. Richard Kimble, the fugitive in question. For non-fans of the series (which was actually quite good, come to think of it), Kimble is convicted of his wife's murder, despite his protests that the crime was actually committed by a mysterious “one-armed man” who overpowered the good doctor and fled the murder scene. On route to his incarceration (and pending death sentence), fate intervenes in the form of a failed jailbreak in which the driver is killed and the bus -- Kimble and all -- is thrown into the path of an onrushing train. In the ensuing excitement, Kimble manages to escape, and the hunt is on. Led by U.S. Marshal Sam Gerard (Tommy Lee Jones in another fine, flinty performance), the Feds and Chicago's finest embark on a search for the elusive doctor that may eventually lead to more than they suspected. Jones is the best thing about this all-too-often predictable chase film. As Gerard, he's a tenacious bulldog of a cop, unwilling to even entertain the idea of Kimble's innocence (indeed, when Kimble tells him emphatically that, “I didn't kill my wife,” Gerard flatly responds, “I don't care.”) The Fugitive's last 45-odd minutes may leave you wondering if you're watching Regarding Henry, or what -- Ford's Kimble apparently enjoys similar tastes in both clothes and mannerisms, what with the blue Gant and the tweed sport coat, and his soon-to-be-patented wry half-smile that pops up in the vicinity of his mouth so often. Regardless, as far as the chase genre goes, there have been worse films (better ones, too). Director Davis valiantly tries to keep the breakneck, harried pace of an actual flight going throughout, and only occasionally drops the ball (the film's convoluted conspiracy ending is the first example to beat me about the face and neck just now -- others will crop up after deadline, I'm sure). Ford may be the closest thing we have these days to a Gary Cooper, but really, where's David Janssen when we really need him?