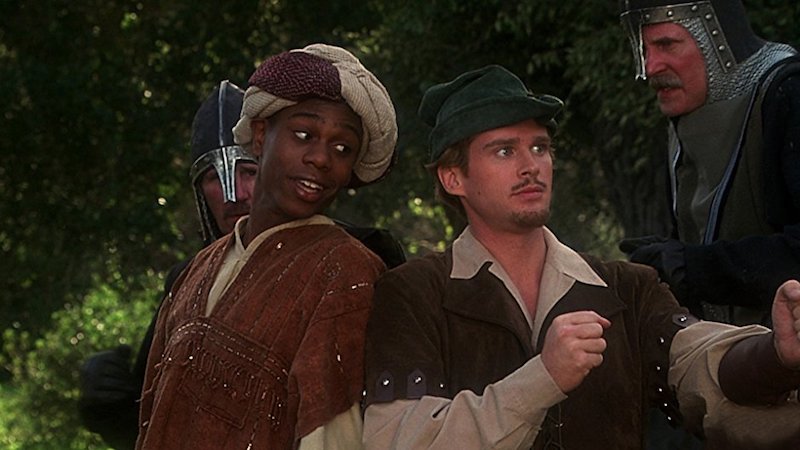 One glance at the title shows you just where Brooks's head is these days: in his pants, specifically, in the area immediately below the belt. The one-time master parodist (Blazing Saddles, Young Frankenstein) seems so focused on this universe bounded by the ass on one end, so to speak, and the groin on the other, that he forgets to do anything at all original to spoof Robin Hood or the swashbuckling films Hollywood has made of him. How else to explain the abundance of hoary gags about flatulence and copulation resurrected from the mists of time and given cinematic life -- such as it is -- here? I mean, one character is named Latrine! That's taking toilet humor a bit too literally, isn't it? Mel, Mel, Mel, it isn't the vulgarity we mind, it's that you're cribbing your crudities from the grade school playground. We heard those gags -- years ago -- and you don't even tell 'em as well. Maybe you think you're catching those Naked Gun/Hot Shots whippersnappers at their own game. Sadly, no. They make live action cartoons that spew out 60 gags per minute. You squeeze out maybe one gag in five minutes. Besides, your best parodies were much more than gagfests. They had stories, with characters who, absurd as they were, had something at stake. We get a glimmer of that here, mostly in Rees's Sheriff; Rees takes this silly man quite seriously and it works. Elwes strives to make a real character of Robin -- and he succeeds whenever he can swash and buckle a la Errol Flynn -- but when he has to do an eyeball-rolling take, the gee-folks-it's-a-comedy kind, he just looks like an embarrassed actor. But Lewis looks like that the whole film! In his perpetually downcast eyes and whispered lines, the cinema now has a perfect portrait of an actor who feels he's making the greatest mistake of his life being in this picture. Mel, go back and screen the scene where Robin suddenly bursts into song, serenading Maid Marian the way Nelson Eddy did to Jeanette MacDonald, while his Merry Men watch their silhouettes, their own medieval movie musical. It's this film's most inspired bit, and it has nothing to do with Robin Hood's story or Kevin Costner's movie. It's a bit that comes from your love of movies. That's where your head belongs, in the flickering lights, not in your BVDs. 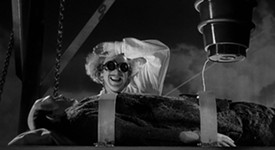 Young Frankenstein
Brooks was in his film prime when he directed this spoof of the old Universal horror movie. Peter Boyle as the Monster performing "Puttin' on the Ritz" is priceless comedy. Blazing Saddles
Brooks’ early reputation as a film director rests with the success of this raunchy Western spoof. A great cast is eclipsed by the hilarious performances ...