Ironically, Japanophile Kaufman, assigned to Michael Crichton's xenophobic Rising Sun, decided to go classicly hard-boiled as a way of defusing the novel. In nationally specific terms, he de-politicized the book, shifting from an attack on Japan's otherness into an attack on corporate otherness, the mighty high stakes world of international business. Classic hard-boiled fictions send a knight out in search of the truth in a cold and evil world where there may be no truth. Kaufman has a genius for genre which he invariably labors against, making his films more metaphysical than action-oriented. His best efforts are his story for Raiders of the Lost Ark, the screenplay for Clint Eastwood's The Outlaw Josey Wales (the best post-Wild Bunch Western) and the first third of The Right Stuff (the Chuck Yeager Story as tough pulp drama). Kaufman's a pulpster who longs to be an artist, so even his best movies are, at least, in some ways failures, including The Great Northfield Minnesota Raid, Invasion of the Body Snatchers, and the spectacular The Wanderers. His worst films, The Unbearable Lightness of Being and Henry and June, have been willing to suffocate for their art -- and suffocate they do. Kaufman instinctively turns to his pulp roots here to avoid the novel's Japan-bashing (which resulted in novelist Crichton and collaborator Michael Backes leaving the project), turning the novel into a brilliant Chandleresque hard-boiled thriller where the murder plot, about a young woman found dead during the opening of a Japanese corporation's new headquarters, is merely a structure around which to wrap the actions of a variety of characters and hang elaborate atmospheric scenes. Kaufman, not noted for pace, pushes this ahead at a brisk speed, weaving an ever thicker web, until we know that it doesn't matter what we know and what we don't know -- we probably don't know anything at all, anyway -- which is the epiphanal hard-boiled moment. The film works because of the world it creates, aided by the cinematography of Michael Chapman and the set design of frequent Coppola collaborator Dean Tavoularis. Kaufman has brought us a modern Los Angeles as an otherworldly vision, very much a living, breathing character in the story. Wisely, the film is overloaded with characters (I hate mysteries where there are two suspects), with everything centered around Snipes and Connery, who make a terrific team, the enigmatic Connery and the street-smart Snipes. The rest of the cast helps, especially Keitel, Tagawa, Carrere and Mako. The current media discussion over whether or not this is a racist film misses how much this is a classic hard-boiled detective novel, the Japanese functioning as an almost faceless evil. Kaufman, without pretense, rips this one along and you can't help but wish he'd whip out just one or two more Westerns before he returns to further explorations of European love triangles. 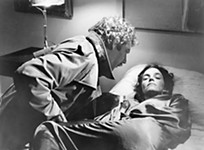