Why Has Bodhi-Dharma Left for the East?

This monumental effort by filmmaker Bae Yong-Kyun -- four years in the making, with the Korean artist acting as producer, director, screenwriter, cinematographer, and editor -- is a movie which begs to be studied. Its stately pace, lingering shots, impressive compositions, painterly depictions of ponds and woods and hills, gravity in considering questions of life, death, and rebirth, emphasis on the need for contemplation to attain Enlightenment, the obvious care with which it has been made, all blend to invite the viewer to treat each shot as a lesson that can be pored over for greater meaning. Bae's story is as simple as a folk tale: an elderly Zen Master, a young monk, and an orphaned boy share a tiny hermitage deep in the mountains. The Master knows himself to be near death and works to pass a final lesson onto his disciple, that life is a cycle in constant renewal; that which appears to die merely passes into another phase of life. He gives the young monk a Koan, a kind of riddle which must be meditated on for its meaning to be grasped, to help him. Meanwhile, the orphan struggles with his own experience of death. He has killed a bird, and in addition to the regret he feels for the act, he finds the bird's mate now follows him wherever he goes. Eventually, the Master dies, and both young men must find in the experience some new truth of death and the continuation of life. The film has the slow grace of a priest moving up an aisle and something of the piety, too. For all its talk of life and its frequently beautiful depictions of nature -- some of Bae's scenes suggest a Monet in motion -- the film seems somewhat distant from life. Its human characters, certainly the adults, are never brought too close for our inspection and seem a bit flinty. The boy, played by Huang Hae-Jin, is considerably warmer, in that way that seven-year-olds often are. Warmer still are two animal characters: the grieving mate of the dead bird and the Master's cow, which escapes from the monastery one night and purposefully roams the nearby woods. Bae conjures some extraordinary shots of these animals; they do nothing to impose human emotion on these animals but are surprisingly full of feeling. Still, the distance at which the film works is a barrier for me, as I know the pace will be for others. In a way, the film recalls Ingmar Bergman's early philosophical works: often spare, sometimes striking, always provocative, arguably brilliant, but hardly easy viewing. Bae Yung-Kyun's four years of effort have yielded a celluloid Koan, to be contemplated and considered over time, possibly a lifetime.

READ MORE
More Why Has Bodhi-Dharma Left for the East? 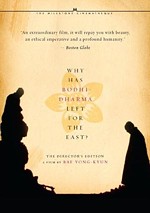 Why Has Bodhi-Dharma Left for the East?
This week Milestone is releasing the director's edition on DVD for the first time, complete with 10 minutes of previously unseen footage, and even with no other extras to speak of, it's a cause for celebration