Based on the story My Quarrel with Hersh Rasseyner by little-known Yiddish author Chaim Grade, this Canadian film by Israeli director Cohen comes across as a sort of vituperative, Jewish My Dinner With Andre but without the claustrophobia. This sometimes trying, 88-minute exploration of friendship, loyalty, and abandonment in the conflict of the secular versus the religious begins in 1948 Montreal on the afternoon of Rosh Hashanah, the Jewish New Year. While waiting for a friend in the park, Chaim Kovler (Thomson) -- a Holocaust survivor who fled his native Poland, and is now a writer living in New York -- spies a group of Orthodox Jews performing the New Year's custom of tashlich (which is the symbolic “casting away one's sins” from the previous year) near a large pond. The rabbi in the group looks familiar to Kovler, and as fate would have it, he is none other than Kovler's oldest friend -- and bitterest enemy -- from his boyhood, Hersh Rasseyner (Rubinek). The two men end up wandering through the park together (where the physical setting becomes a symbolic oasis of life and rebirth in the wake of the brutality and death they witnessed during the Holocaust) recalling their youth, reviving the quarrel that caused their estrangement some 15 years earlier, and debating their opposing views of the world and God. Kovler had not only abandoned the yeshiva (a school of intense religious training in Judaism), which is the reason for his earlier split with Rasseyner, but he has since abandoned his religious faith altogether, especially because of the Holocaust. Kovler angrily questions the existence of a benevolent God who would permit six million of His Chosen People to perish in the gas chambers. But Rasseyner, whose faith was only reinforced through his surviving the horrors of a concentration camp, counters that without faith in God, mankind is without a sense of moral guidance. That is, if there is no master of the universe, then who's to say that Hitler was evil? Thomson and Rubinek give credible performances, bringing a three-dimensional sense to their respective characters that makes their opposing viewpoints all the more interesting. But, in the same token, it's the same opposing viewpoints that are rehashed over and over throughout the duration of the film, and that makes it seem almost stale and unbearably too long. Another aspect to the film is that unless you are Jewish, and or are familiar with Judaism in a religious and cultural sense, then a lot of the language and actions of the two main characters will be meaningless and alienating. So, The Quarrel may not be everyone's cup of chicken soup. 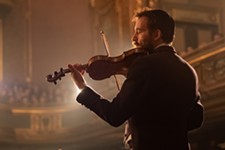