Ripe as a midsummer melon, Kenneth Branagh's return to Shakespeare captures the Bard's captivating comic romance at the peak of flavor. It's full of more emotion and humor than a dozen multiplex movies combined and is juicy and sweet in the bargain. The multi-talented Branagh, serving as the adaptor of Shakespeare's story, as well as the film's director and male star, as he did for Henry V, is ever the careful farmer, taking a story that's implausible and easy for modern audiences to snicker at and nurturing it with a knockout cast and an air of festivity until it blooms as an infectious blend of feeling and fancy. Branagh and spouse Emma Thompson again make a charming screen couple as the feuding wits Benedick and Beatrice, two quite bright, quite confirmed unmarrieds who constantly snap at each other like terriers, albeit very clever terriers. We get hints of a prior affair between the two, one in which Benedick behaved badly, and that heightens the comedy when their friends conspire to convince each that the other is madly in love with him or her. Branagh and Thompson turn neatly from steely witsnappers to wide-eyed love puppies, and it's in just this sort of area that Branagh's cultivation of big feeling is so remarkable; in most films, playing the comedy so broadly would seem too much, yet Branagh manages to push it right to that point of acceptability and hold it there, boldly but believably. Likewise, in the story's dramatic moments, when Beatrice's cousin Hero is accused of betraying her intended Claudio and a rift opens between Benedick and his friends Claudio and Don Pedro, the depth of passion expressed is profound, particularly by Thompson's Beatrice, yet it never crosses into ham-handed, big-A Acting. The rest of the cast generally displays the leading couple's command of big feeling, though Michael Keaton, perhaps feeling desperate to bust loose after his recent bouts as a stoic Caped Crusader, zooms into his own galaxy for his portrayal of Dogberry, the malaprop-spouting constable. Keaton's version, slovenly and grotesque, looks like a refugee from Barfly, and at times, you'd swear you could smell him. Yet, somehow, even his extreme performance grows on you. Robert Sean Leonard and Kate Beckinsale, as the young sweethearts Claudio and Hero, drip doe-eyed affection of the most sympathetic kind. Denzel Washington, as the prince Don Pedro, is as noble as a seaside cliff and genial and sexy. Keanu Reeves never quite works himself up to full sneer as the wicked schemer Don John, but his performance does nothing to spoil the fun. Sunny, warm, and so full as to almost split its skin, that's Much Ado. The Bard himself said it, “Ripeness is all.” Here's a hey nonny nonny to that. 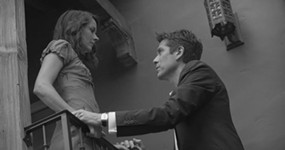 Party All the Time
'Much Ado' and much fun with Whedon, Acker, and Denisof

More Much Ado About Nothing 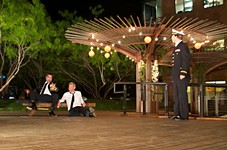 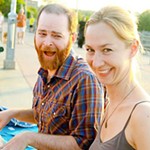