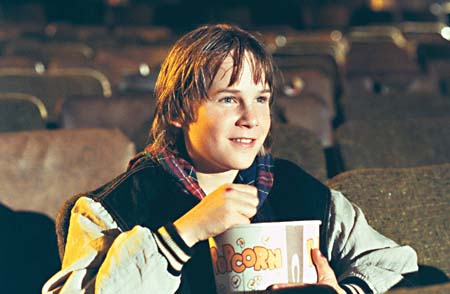 Trying to be everything to everybody rarely, if ever, works, and Last Action Hero is a textbook case in point. Borrowing heavily from Woody Allen's Purple Rose of Cairo, professional action director McTiernan has crafted a massive juggernaut of a film, overflowing with breathtaking stunts, witty one-liners, and well-chosen cameos. It's a film with so much promise, you just want to hunt down everybody involved when you realize it doesn't deliver the goods. Twelve-year-old New Yorker Danny Madigan (O'Brien) is a movie buff engrossed in the “Jack Slater” series of action films. Slater, a fictional cross between Bruce Willis, Van Damme, Sly Stallone, and others, is the sort of film character Schwarzenegger was born to play -- it's hard to imagine anyone else in the role. When Danny receives a magic ticket at a private screening of Jack Slater IV, he finds himself catapulted through the screen and into Slater's “reality,” a place where all the women are California knockouts, the good guys always win, and you can't say four-letter words because “this movie's PG-13.” Director McTiernan uses this alternate world as a means to poke fun at Schwarzenegger's rugged persona and that of action films in general. In-jokes flow like Tinseltown dollars here -- in one brief shot, Danny spies both Sharon Stone and an evil-looking Robert Patrick (Schwarzenegger's robotic foe in last summer's Terminator 2) exiting the opulent LAPD headquarters just as he's walking in with Slater. And upon first seeing Slater's friend Practice, played by F. Murray Abraham, Danny exclaims, “You'd better keep your eye on that guy. He killed Mozart.” When villainous killer Benedict (Charles Dance, in perhaps the film's best role) manages to get his hands on Danny's magic ticket, the film jumps back to the “real” world climax, and to the NYC premiere of Jack Slater IV, complete with cameos from the “real” Schwarzenegger and wife Maria Shriver, Chevy Chase, Jean-Claude Van Damme, et al. Really, it's not as confusing as it sounds, and, unfortunately, it's also not nearly as good as it sounds, either. Slater/Schwarzenegger's quips wear thin in the film's first half-hour, and even McTiernan's Player-esque stabs at skewering his own stock-in-trade fall flat way too often. At the nearly-packed screening I attended, there seemed to be far more babies crying than people laughing in the audience -- a sure sign that something's amiss. The film tries so very hard to be The Movie of Summer '93 that it almost makes you sick for what could have been, what should have been, and, in the end, what it is: soulless sound and fury -- action in a vacuum.