More dreadful than you might expect from the trailers, Life with Mikey flounders at the beginning and then slowly sinks towards its end. Fox's Michael Chapman, a former child star of the hit TV show Life with Mikey, runs a down-on-its-luck talent agency. Actually, his beleaguered brother (Lane) does all the work, going through endless open auditions of talentless children (the best parts of the movie). Chapman oozes through his life -- beer, Chinese take-out, Turkey Hut openings, and occasionally showing up at work. The agency survives on the success of the cereal king (Krumholtz), its most important and difficult star, an obnoxious preening pre-teen, and the slim residue of Chapman's Life With Mikey fame. Finally, just as his brother threatens to quit the business and his life has bottomed out, Chapman has his pocket picked by an 11-year-old thief. He chases her, confronts her, loses her and later discovers her moving a crowd of onlookers to tears with the story of her family. Impressed by her talent he signs her on. At this point, the film becomes pure Hollywood. Screw morality, screw reality, this is fantasy land. Forget that Angie (Vidal) is a pickpocket, that she seeks consolation after earning a small fortune by shoplifting. Instead of confronting any issues, the film Neil Simons its way along toward its end, imitating that master's habit of substituting jokes for story and theme. At first, the agent and his street-smart star fight like cats and dogs, with Angie resisting the sleazy charms of agent Chapman. But then they begin to grow on each other. Eventually Angie moves in with Fox, (not romantically, she is 11), taking over his life as he uses her to regain his drive. Angie becomes the hit that Chapman predicted. Only cute as hell Vidal, able to act in a range of emotions, doesn't create a credible character. Happy, sad, tough, weak, are so clearly etched, that when she tries to blend this into an emotionally complex person, it doesn't work. Her failure just accentuates the film's script and directorial problems. It's basically an unhealthy film, not purposefully, but from the failure of the filmmakers to actually think about what the characters and story mean. This is like one of those Depression musicals, where social reality is merely a backdrop for gaiety. This girl is a pickpocket and a thief, incredibly street-hardened at 11. The film treats her as though she's a middle-class kid from the suburbs, suffering more from acne than emotional and physical deprivation. It is repulsive and sours the comedy. Remarkably, but not surprisingly, Fox finds his character, a sleazy disappointed soul, and carries him through some kind of transformation. Lane turns in a fine performance, the kids are great and although Cyndi Lauper isn't given much to do, she does it well. But overall, afterwards I was glad to get out. 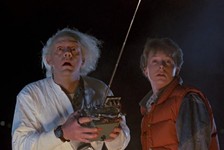 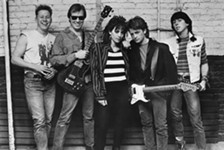 Light of Day
Despite popular disregard for this Paul Schrader blend of family melodrama and rock & roll, some of us here at the Chronicle truly love this ...