She: the highly prized diva of last summer's surprise comedy blockbuster, Sister Act. He: TV's best paid and newly retired star of the top rated sit-com Cheers. Together, they are Whoopi and Ted, here presented as an entertaining comic and romantic pair cut from the opposites attract school of storytelling and whose off-screen activities have garnered them more press than any Touchstone publicity flack could ever invent. Made in America is basically a one-joke movie -- the discovery that the sperm that Sarah Matthews (Goldberg) was artificially inseminated with 17 years ago was not the sperm of a black man as she had thought but, rather, of a white man and, moreover, not just any white man but the pinnacle of white gaucherie, goony advertising shill Hal Jackson (Danson), who hawks cars on local TV commercials, usually while teamed with circus animals that rival his intelligence. Goldberg and Danson hold up quite well as the conduits of such silliness. For the first time, Goldberg is sustainable in the romantic lead and Danson expands his acting repertoire beyond the familiar Sam Malone range (despite this casting as another charmingly ignorant lout) whether his co-stars be humans or animals. But whatever chemistry these stars share is undercut by the movie's loud and rambunctious staging and humor as if mildly funny things might be made hilarious by the mere use of a fisheye lens or an unlikely coupling could be turned outrageous by having the pair, in their lustful frenzy, demolish every lamp and piece of furniture in sight. It's as though the animals in the movie reduced the whole project to a barnyard level humor. When things lag, just get Goldberg to rant about “sperm, sperm, sperm, sperm, sperm” or catch a shirt sleeve in a pants fly or denigrate the vapid, aerobicized child-woman (Tilly) who lives with Hal. Then there's also the wild implausibilities of the script like the high school science lab where all the students are freely (in the age of AIDS) pricking each other for blood tests or the easy break-in at the sperm bank where offspring Zora (Long) manages to tap into the computer files in mere seconds and instantly manifest 17-year-old records. Newcomer Long is a pleasure to watch and Smith kind of riffs by himself off to the periphery of the action as though looking for a movie to belong to. Overall, the quality of the film has that made in America feel -- sturdy enough to last through the initial warranty period but not designed as a long-term durable good. 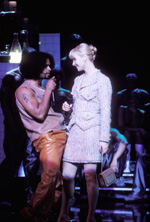 Marci X
A hip-hop artist and a Jewish American Princess discover that bling-bling makes the world go ’round.