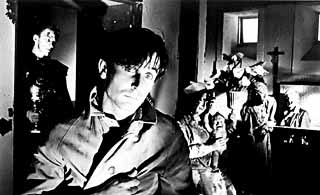 The Citizen Kane of Oedipal zombie-cannibal-right to death-comedy-love stories. Kiwi auteur Peter Jackson -- best known stateside as the maniac behind the Muppet-perversion Meet the Feebles -- takes the shopworn flesh-eating zombie genre by its rotting horns, adds a dash of Monty Python, and comes up with a film so gleefully over-the-top that it's decidedly hard not to gag while you're laughing yourself incontinent. Rivers of gore, entrails, and ambulating body parts surround poor nebbish Lionel (Balme), a mama's boy whose mama (Moody) just happens to have been bitten by a Sumatran Rat Monkey and consequently degenerates into a flesh-hungry omnivore with a keen knack for oozing pus in front of the houseguests. Before you can say George Romero, she's snacking on the neighbors, and Lionel's up to his neck in overly-mobile cadavers. Though he tries valiantly to keep them sedated (with a big jar of “Sedative,” natch), it's not long before all hell breaks loose in a 30-minute climax that makes Re-Animator look like Captain Kangaroo on a bad hair day. Add to this Lionel's newfound love interest, Paquita (Penalver), his scheming uncle Les (Watkin), and a zombie infant that makes abortion seem like a really, really good idea, and you have quite literally the most disgusting comedy ever. Jackson, obviously aware of the cliché-ridden dangers of “horror comedies,” chucks convention and good taste out the window and goes for the gusto (or is that “gutso”?) with uncanny results. The film moves from gag to gore to gag again like a rocket from the crypt and never lets up -- just when you think you've seen the worst, Jackson tops himself and there you are squirming in your seat again (and loving every minute of it). Sick. Perverse. Brilliant.