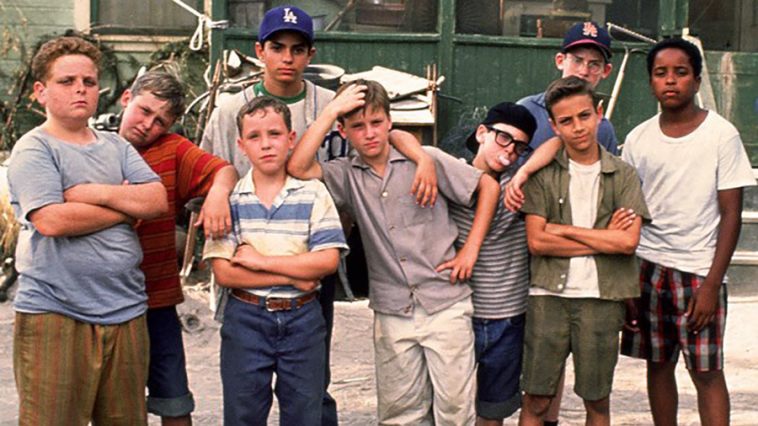 The Sandlot is a movie with a comfortable working knowledge of the term “family entertainment.” Told as the recollection of a long ago summer by a now-adult narrator, The Sandlot combines elements of nostalgia, kids' adventure, roots reflection a la American Graffiti, and that unique American sub-genre known as baseball movies. It's a grown man's memory of his first awkward summer in a new neighborhood in 1962, living with his mom and new step-dad and trying not to be such an egghead and learning to make new friends and enjoying the things that other boys his age enjoy. Though these difficulties might seem manageable in retrospect, The Sandlot doesn't trivialize their passing importance or weight, nor does it diminish their urgency by rationalizing them away or putting happy faces on the whole affair. What's unusual about The Sandlot is that it allows kids their dignity – in, of course, age-appropriate ways. The Sandlot respects and gives credence to the eternal monsters and heroes of youth. And it acknowledges a time when learning to catch a ball on the fly is the pinnacle of success, when figuring out how to make new friends is life's biggest challenge, when the unfamiliarity of your mom's new husband is life's biggest imponderable, and when a pair of P.F. Flyers on your feet really could make you run faster and jump higher. The Sandlot's story is simple. We get to know these nine neighborhood boys (eight white and one black -- makes you wonder exactly where this 1962 suburban neighborhood is), witness some of their dreams and fears, watch their summertime adventures. The movie's last and penultimate adventure, about retrieving a stolen baseball from the Beast who lives behind the outfield fence, goes on perhaps a bit too long. And the movie's adult voiceover is sometimes a bit too strained, a bit too much like The Wonder Years – too ready to find life's lessons in the ordinary detritus of childhood. But if the adult reflection seems occasionally phony, the children never strike a false note. They are a grand collection: natural and without artifice as they experience the twilight of boyhood. Allen (Raiders of the Lost Ark) is ideally cast as the mom, and as the step-dad, Leary gets a break from his bad boy of MTV image. The Sandlot is truly one about the boys of summer. 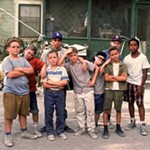