The Adventures of Huck Finn

It's hard to know who might be the targeted audience for this seventh film adaptation of Mark Twain's classic novel. Some of the material is simply too scary for kids yet this rendition has also been stripped of much of the caustic bite that has made it such an enduring favorite of adults. The movie is being marketed as entertainment for the whole family but it's likely to satisfy neither parent nor child. The Adventures of Huck Finn is not a total bust however, despite being a hard sell. The focus of this retelling is on the adventure part of the story. Packed with well-told action, the movie moves along briskly as Huck (Wood) and runaway slave Jim (Vance) make their way down the Mississippi. The focus on adventure comes at the expense of Huck's keen observation of the foibles of adults and “sivilization.” Oh, he learns a thing or two about morality and loyalty from Jim but it's never more complex than notions like “slavery is bad.” This may be indicative of the same impulse that truncated Huckleberry to Huck, stripping the character down to a convenient road handle instead of a literary allusion. The character of Jim also suffers from this smoothing-over tendency. Though more than ably brought to life by Vance, Jim has been given a makeover to jibe with more modern sensibilities. This Jim is extremely well-spoken for an uneducated slave and, of course, the movie eschews the book's more racially offensive language. In all, Vance's Jim is a good character; he's just not Twain's character. As Huck, Wood is fun to watch -- he has an expressive face and a lively presence. In the latter half of the film, Robards and Coltrane have good hammy fun with their con men roles of the King and the Duke. Directing newcomer Sommers (who also wrote the screenplay) guides the proceedings with a visual flair and vigorous pacing. If you're bringing children to this, please take the PG rating to heart. Be prepared to explain why, at the film's outset, Huck's father kidnaps his son and tries to kill him. Make no mistake, this is not wholesome family entertainment. But where did we ever get the notion that Mark Twain was? 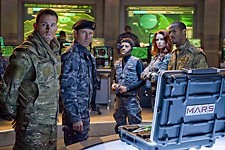 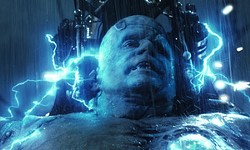