The year is 2042 and the word “terminator” has taken on a new cultural meaning. Terminators are the abortionists of this future society. By constitutional amendment, abortion and non-barrier methods of birth control have become illegal in this America of the near future. Furthermore, New York state has just put a “fetal kidnapping” law on the books, whereby it would be illegal for a woman to travel outside the country to terminate a pregnancy on foreign soil. The law was designed to equalize prosecution along class and racial lines since the prisons are crowded with convicted poor women of color while upper-class white women can afford to travel to places like Sweden or Cuba where terminations are performed legally and discreetly. Rain Without Thunder probes the case of Beverly and Allison Goldring, a mother and daughter who are the first to be prosecuted and imprisoned for “fetal kidnapping.” The movie's structure follows a news reporter (McCormick) as she videotapes interviews with Beverly (Buckley -- perhaps best remembered as the gym teacher in Carrie), her daughter Allison (Thomas) and a host of other involved players and observers. So far, so good as concerns “premise” but Rain Without Thunder fails in its execution. The entire movie is composed as a series of “talking head” interviews, a technique that's poison to a documentary and deadly to a fiction film. It is no exaggeration to say that this movie is thoroughly “leg-less.” Fortunately, writer/director Bennett has assembled an extraordinary supporting cast here -- notably Daniels, Forrest, Hunt, Jones, Greene, Pendleton -- who accomplish more with their talking heads than most actors can achieve with their whole bodies. Rain Without Thunder also has a certain preaching-to-the-already-converted quality that sometimes makes it come across more as propaganda than cautionary tale. (A Handmaid's Tale, perhaps? The feminist abortion rights organization of the future is not uncoincidentally named the Atwood Society.) Another problem is that Rain Without Thunder plays a little too fast and loose with the established facts of 20th century history -- an offense the movie criticizes Greene's revisionist historian character of committing (in one of the movie's most chilling sequences) when he negates any prior existence of a women's movement in America. Despite all the reasons why this movie should not work, in its own way, it does. Between the welcome novelty of its subject matter, the terrific readings by all the players and the heartfelt and committed narrative pulse, Rain Without Thunder manages to burrow into your forebrain and shake things up a bit. As cautionary tales go, this one should not be ignored. 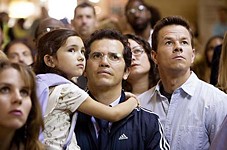